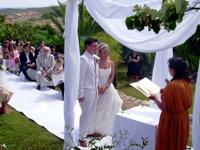 A Time to be Wed

Last year we published a feature highlighting the advantages of a wedding ceremony on the Costa del Sol, one of them is that there is no need to go to the tropics or some Pacific Island to experience an out of the ordinary wedding celebration abroad, which would be too costly and too far for guests to attend.

We also advised on the necessary documentation and procedures to be followed in order to marry officially in Spain and suggested that one should contact a firm of wedding planners such as J.K. Wedding Planners who would be able to advise and organize the whole event.

We also suggested a relatively easier alternative of an official wedding at the Registry Office in Gibraltar, which was made famous by John Lennon and Yoko Ono in 1969 when they were married at the British Consulate there by the Registrar in a 10 minutes ceremony. After the formality, one can choose between a blessing in a church in Spain with the ensuing festivities or continue with the festivities in Gibraltar itself.

It certainly makes an impression on us to be informed that a young couple from England is doing exactly what we have stated in our article, so we attended the wedding to record some photographs and show you all that what we do say in our articles is far from fiction.

Chelsea & Ross asked J.K. Wedding Planners to organize their official marriage at the Registry Office in Gibraltar and then a Blessing in front of family and friends at a hired luxury villa on the Costa del Sol, where also the reception took place.
The couple stated that, although they do reside in England, the main reasons for a Costa wedding was the sunny weather and because it could be attended by most of the family and friends, even though it was abroad.

As they are not resident in Spain, their stay on the Costa was extended to include the honey moon.
There is no doubt that the wedding was a success and a memorable event will be cherished by the couple and certainly remembered by all those present.

Chelsea chose and purchased her wedding dress in England, obviously it was more expedient or her to do so, had she had the time to combine this with a holiday before the event, or had she been a resident here, she would have been able to purchase her dress in Gibraltar from say, FiFi Boutique and organize all flower arrangements with Florium in Sotogrande.

What did you think? We are well organized down here! And have we have high quality standards at prices far more competitive than in the UK, starting with the rings (Tax Free) from The Jewel Box in Gibraltar.

There are many venues suitable for receptions all over the Costa and in Gibraltar, where for instance, the Cable Car can take you right up to the top of the Rock and to the Mons Calpe Suite, located within the Cable Car Top Station complex, which provides the most spectacular setting on the Rock for celebrations of all sorts.

If you are thinking of tying the knot, The Costa del Sol & Gibraltar should be given some serious consideration!

A time to be wed

Yes I agree, Spain and in particular the Costa del Sol is a fantastic place to get married. You can save loads of money by marrying here instead of in the UK and the weather is pretty much guaranteed. A great company to use is Sol Wedding, my friend used them for their flowers, photos and video and it was absolutely perfect. 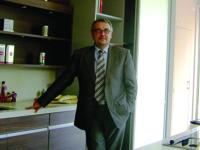 Real people of the Costa del Sol: Dirk Van Mol
Our quest to present you with some of the Real People who live on the Coast, this month leads us to Dirk Van Mol, from Belgium.
Where are the Squirrels now?