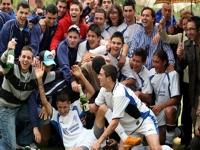 The under 19Â’s team was declared champion!

The U19Â’s are having a great season. After securing their place in the play offs for promotion to the National League a couple of weeks ago, last Sunday the 20th of April, in front of our own fans they beat Atco. Benamiel 6-2 and secured their title.
The team trained by AdriĂˇn Cervera have had an exceptional season, having been at the top of the league for most of the season, winning 20 of their 30 matches.

At the time of going to print no matches in this mini league had been played the first match was due to be played on Sunday the 27th of April away to Ăšbeda Viva CD, then they will play at home on consecutive SundayÂ’s first against Granada Atco. and then Vera CF, with the corresponding fixtures being played in reverse order finishing at home against Ăšbeda.

We would like all football fans and UD Marbella fans to cheer the team on to promotion, the lads deserve it for their fantastic play. LetÂ’s show them our support and help them win promotion.