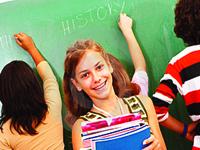 As my elder sister, who was only one year ahead of me, was already there and had lots of friends, I wasnÂ’t really concerned about the move or the fact that not one of my Primary School friends would be attending the same school.

We set out together on the first morning to catch the first of two buses that would take us to the school. It was a relatively long journey, twenty minutes on each bus, but it flew by as we chatted excitedly. I couldnÂ’t believe that I was now attending the same Academy as my sister as I happily joined the other new students in the hall.

It was a Convent school and, although both boys and girls attended, we were segregated with separate classes and separate playgrounds. The Head Nun, Sister Mary Agnes, began the roll call and one by one the new students marched up to the stage, formed new classes and then left with their Form tutors.

As the Sister reached the bottom of the list, four students still hadnÂ’t been allocated a class and, of course, I was one of them.  We were taken to the office where we discovered that there had been a mistake in the letter we received and we should have been advised to go to the annex. This was not, as one  would have expected, an extension built on to the Academy but a completely different building entirely, about a twenty minute walk from where we were. Things werenÂ’t going quite as well as expected and I couldnÂ’t even tell my sister where I was going as we were told to set off immediately and walk as quickly as we could, after being given a hastily drawn map of how to get to the annex.

Needless to say, when we arrived, we were all sent off to different classes. By then, my class had started their first science lesson and everybody had already been partnered up so I had to work with the teacher, who was a particularly grumpy individual. I spent a miserable first day, in fact I spent a miserable first few weeks feeling completely alienated as I hadnÂ’t been there right at the beginning. The following year, my year group was moved to the Academy and my sisterÂ’s was moved down to the annex!!

This just goes to prove some of the benefits of continuous education at one school which avoids any traumatic move from Primary to Middle School or Secondary. There are many schools on the coast where a child, starting school at four years old can continue all the way through to upper Sixth Form. Whilst some may relish the thought of going to a new school, most children feel anxious about having to make new friends and worry about what the new teachers will be like and if they can cope with the level of work expected at Secondary.

At Mayfair International Academy, most pupils know all other students in the school from Reception up. One little four year old gets on the bus with the Sixth Formers who completely dote on him and they make sure that he gets off at the correct stop and that there is someone waiting for him when he alights. Bullying is almost unheard of as all students know that it would not be tolerated and the teachers vigilantly watch out for any sign that would point to a pupil being bullied. Pastoral care is second to none with conscientious Form Tutors and teachers who often go beyond the call of duty.

Secondary teachers liaise with Primary teachers and invite Primary classes in to the computer lab or science lab to experience first hand how classes are conducted in the Â´bigÂ´ School.  The end result is that pupils starting in Year 7, which is the first year of Secondary School, are already familiar with the classes, teachers and, of course, their classmates and there is no trauma at the beginning of the school year.  Pupils arriving from abroad are given a Â´soft landingÂ´ by being partnered up with another student for the first few days until they Â´find their feetÂ´ so to speak.

The Academy offers quality education based on the English National Curriculum and boasts its own indoor and outdoor swimming pools and fitness centre. A bus service brings students from as far afield as Duquesa and Elviria. The curriculum is constantly being improved with the introduction of new disciplines for both academic and sports subjects.  The Academy is hoping to offer a new National Pool Lifeguard course in the near future which will compliment the Gym Instructor and Personal Trainer qualifications, already on offer. 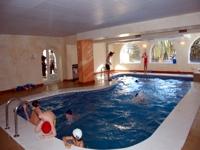 Children & Swimming Pool Accidents
More than three-quarters of children who drown in swimming pools are out of sight for less than five minutes
Laugh or cry?

The Duke of Edinburgh Award