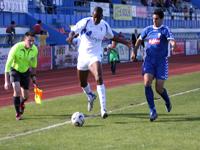 В“UD Marbella playing a more attacking formation came from behind to beat Algeciras 3 В– 1 in a match that they couldnВ’t afford to loseВ”. States John Frutos, the clubВ’s manager.

With Carl Cort and Carlos Rivera starting the game on 23rd March, the home fans felt quite optimistic that this could be a day that Marbella scored a few goals.

To every ones surprise and even before all the fans had taken their seats Algeciras took a quick 4th minute lead. A long ball from the middle of the pitch fell to MГЎiquez who headed the ball into the Marbella net. This was the only real chance that Algeciras had in the fist half and they managed to make it count.

MarbellaВ’s reaction was good though and rather than letting their heads go down they continued playing in a positive manner creating several half chances. In the 9th minute Christian put in a great ball that fell to Quini who struck a low shot that went just wide. Cort and Quini were starting to play well together causing the Algeciras defence several problems. In the 29th minute Cort played a good ball through to Quini who hit the ball well only to see FГ©lix in the Algeciras goal push the ball round the post for a corner. A minute later Cort again played a ball through to Quini who struck the ball well from an acute angle that again had FГ©lix stretching. On 40 minutes Marbella had a goal disallowed for off side; Ibon put a good ball in from the right Cort flicked it on to Quini who guided it with his head into the Algeciras goal only to see the linesmanВ’s flag raised as he turned to celebrate.

The second half started in very similar circumstances with Algeciras missing a glorious chance to put themselves two up. This seemed to get Marbella moving and in the 51st minute Chus LГіpez had a goal bound header cleared off the line. Four minutes later it was Carl CortВ’s turn and he saw his header from a corner saved by the Algeciras keeper. Marbella started to put the pressure on and this paid dividends when in the 61st minute Marbella right back IbГіn DГӯez found himself in space and hit a great shot from 30 yards that the keeper couldnВ’t keep hold of. Marbella was now level and in the ascendancy, they continued the pressure and again reaped the rewards when on 71 minutes Quini headed in a great cross from DГӯez. Algeciras now tiring found MarbellaВ’s attack a real handful and the victory was completed when Jabuti scored MarbellaВ’s third goal deep into injury time.

This was a great result for Marbella who were rewarded for their attacking formation with 3 good goals in a match where they could have had several more. This will no doubt give their confidence a boost as the difficult part of the season starts.

They now travel to Real JaГ©n C.F. on Sunday the 30th March, kicking off at the Estadio Municipal В‘La VictoriaВ’ at 17:00 hrs. A match that could go a long way to ensuring Marbella's survival. 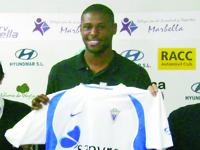 An Exclusive interview with Carl Cort
Newcastle boss Bobby Robson paid ВЈ7million for Cort in the summer of 2000 and Cort now plays for UD Marbella!
Now do you see the difference?