The food reviews are not advertisements. We pay for the meal then we comment and give points as honestly as we can for the benefit of readers. The points relate to quality and price according to the standard of the restaurant.  We try to avoid bad reports so we visit only restaurants which we believe are worth reporting on.

Introduction
This month we decided to pay a visit to ┬ōBlazers┬ö, a newly opened restaurant in Torreguadiaro, which leads to the Port of Sotogrande an area which has certainly moved upmarket in recent months with its newly redesigned centre and newly built commercial properties. The restaurant is quite easy to locate on the main road, it looks very modern and inviting from the outside, it reminded me of something I have seen in New York, which makes it rather appealing; it clearly spells out ┬ōGrande Cuisine┬ö.

The Staff
Very professional! No problems in this area! As soon as we arrived, we were greeted by the ma├«tre d┬Æ who asked us if we had reserved. We had not; nevertheless we were politely escorted to a table by a head waiter. Oh yes! And it was refreshing to see such high standards of service by all the waiters and waitresses throughout the meal. I can add that such attention was not oppressive as it can be when overdone, it was friendly, welcoming and we felt quite at ease.

Atmosphere
The name, the external and the internal d├®cor all told the same story. I don┬Æt know if this was deliberate, but it really did remind me of some exclusive restaurants I have seen in New York. The brick finish on the walls, the dark wood polished furniture, the red leather, and the grand piano, all seemed to convey the same welcoming message. There is plenty of room between tables with the result that one does not feel invaded by other diners. The lighting is excellent, dim enough to make it romantic but light enough on the table to actually see what you are eating. With the piano playing in the background and the excellent food, one is certain to enjoy the atmosphere and what proved to be a very good meal.

The Menus
There are various menus depending on the day and the time. From Tuesdays to Saturdays, from 8pm they serve the Ha├╗te Cuisine menu, which is what we had to choose from. It comprised a very fair selection of starters, main courses, side dishes and desserts each and everyone prepared freshly on the day from fresh produce. The Chef, Ferrier Richardson, winner of several international awards, described his cuisine as creative European with Far Eastern influence. John Dory, Halibut, Lemon Sole, Monkfish and Real Organic Salmon from the Shetlands are the main star attractions; however the addition of Lamb, Beef and Guinea Fowl among others should satisfy any taste.

Wine List
The choice of wines is quite extensive. From red to white, ros├® and cava they are all excellent known wines, mainly Spanish, which is to be expected in a famous wine producing country. A small choice of Italian, French, Australian and other wines is also available to include Mo├½t Chandon, Veuve Clicquot and Dom Perignon Ros├®.

I liked the unusual choice of bread offered at the start: onion bread, tomato or olives. It was a nice touch, just as the small cup of what seemed to be a delicately prepared creamy, thick, hot pumpkin soup, which instead turned out to be made with carrots and walnuts.

Seared Tuna with Sesame & Poppy Seed
Served with Shiso (a Japanese herb), Daikon Salad (mild flavoured Japanese white root), Edamame beans with some Soya and Lime. FBA ┬¢ The slices of tuna, the whole dish for certain reminded me of what the Japanese call ┬ōSashimi┬ö, I can say this because I am rather fond of sashimi, however this was a very clever and innovative adaptation. The fish was unmistakeably fresh, melting away in the mouth, while the other ingredients provided some subtle changes to the taste of each morsel. The dish includes the traditional ginger for clearing the palate before the next course.
Team Score ┬¢ 9/10

Assiette of Tapas
An original mixture of Spanish appetisers with not so Spanish delicacies.  FBA ┬¢ The Olives, Gazpacho. Manchego Cheese and Jamon Serrano emphasized the Spanish influence of this dish, however what really made the difference was the Smoked Salmon topped with what appeared to be a delicious cream sprinkled with caviar and the terrine of crab meat. The choice of different components was well matched and it all blended into a rather original dish with flavours of Spain.
Team Score ┬¢ 9/10

Roast Shetland Salmon
Very well presented in a rather unusual dish, served over a crumbed paella cake and accompanied by grilled asparagus and citrus cream. FBA ┬¢ No, not just roast salmon. First of all you can really taste the difference; the natural salmon is far tastier than the usual farmed salmon you get in the shops. The flavour just lingers in the palate, constantly nagging you to take another mouthful. The creamy citrus cream simply added that special touch that seemed to increase that ┬ōnagging┬ö. I needed the asparagus and the paella cake in between to introduce a different flavour just to clear the palate. Definitely a winner that I shall have again!
Team Score ┬¢ 10/10

Best End Lamb
Another well presented dish, served with black pudding mash, an assortment of root vegetables in a tarragon sauce/gravy.  FBA ┬¢ I chose the word gravy with caution and for the lack of a better word to best describe this delicious condiment that looked like gravy but was something much nobler. The lamb was tender and just as I had asked for, the flavour of the ensemble was simply excellent and very rich. I would certainly recommend this as a meat dish any time.
Team Score ┬¢ 10/10

Cr├©me Brul├®e Surprise
Served on a platter in 3 different small glasses and decorated with a small bunch of fresh cranberries. FBA ┬¢ at first these may appear just like innocent glasses of cr├©me brul├®e, the surprise is that after you have broken through the first layer of caramel and gone through the second layer of cr├©me, the third layer is the different taste in each. One was based on pear, the other strawberry and the third I believe gooseberry. Very cleverly done, quite refreshing and not too heavy after such a good meal.
Team Score ┬¢ 9/10

Trio of Citrus Fruit, Sorbet, Brul├®e Tart
All three were well presented on a platter and looked exactly as described. FBA ┬¢ What┬Æs notable is the choice of combination, which blended well together and the standard of preparation, not to mention the flavour of course, but by this time your taste buds do get used to being spoilt. The tart made a delicious dessert, the cr├©me brul├®e with a base of pears was like a second, fresh tasting dessert and the mandarin sorbet just what you need to complete the meal and refresh the palate.
Team Score ┬¢ 10/10

Summary
I really liked this restaurant; it┬Æs about time we had a good, upmarket restaurant in the Sotogrande area without it being vulgar and presumptuous, what┬Æs more the prices are quite reasonable for what this is. Many restaurants on the Costa, claiming to be of this standard, are by far more expensive, especially in Marbella, yet without the necessary level of cuisine to back it up. There is a lesson to be learned from Blazers. The restaurant is open every day with different menus at different times. On Sundays, for instance, they offer a pretty attractive 2 or 3 courses lunch special. The Pintxo Menu is available every day, all day long offering a choice of single platters like salads, mushroom risotto, etc. at very reasonable prices. On Tuesdays to Saturdays from 12 o┬Æclock to 6pm and all day Sunday & Monday, there is a third menu offering a wider choice then the Pintxo Menu, to include sandwiches, more salad choices and big plates, which, considering the prices, I think is perfect for lunchtime and business lunches. I was told that they do cater for organised group business meals and parties and can even arrange for a dance area to be designated for parties.

Worst Meal of my life

The evening started of very well we the anticipition of having read your review before we left last week we decided to try this place out as it sounded to be a diamond in the ruff . I was extreamly disapointed as soon as i entered the building the atmosphere between the staff and the customers you could cut with a knife . We were lead to a table which was next to a curtined off area. Which the toilets were situated behind. Quiet frankly the smell there was absoulte dreadful. I asked the waitress if we could possible move as it was not the busiest restaurant that i had ever been to in the world. This seemed to inconvence her as i do not know why as they were more staff than customers at this point. I asked her about the stench i was told it was the water, (more of a sewage problem i thought) Then onto the food as this was the reason we had traveled down from marbella. I asked to see the menu it did not really scream anything great of the page. So we decide to have the soup of the day which came it was more of a water down almost drain water look and consistance which was nothing like the tomato soup which we were told after the waitress going to ask the chef . After 2 spoonfuls of that we had polietly said we were finished. The steaks arrived we asked for 2 rare but what was one under cooked almost raw and rubber piece of meat which looked as though it was run over several times by a bus. The other was over cooked and tuff with what we think was suppose to be parsley butter but was more like a block of unsalted butter on top of these steaks as if to make up for the fact it was if the kitchen had no idea what they were putting in front of us. We decided to leave at this point payed the bill and left as we did not want to make a fuss. After we came out still hungry we decided to walk along the main street. There we came across a nice fish restaurant with views over the ocean. We decide to go in and have a look at the menu we were not to sure to eat there or not so we decide we were hungry. After just ordering sea bass and a fillet, which was extreamly enjoyable. The waiter was making small chat with us and asked us where we from and so on and forth, he then told us that the the restaurant had changes in the chefs and alot of staff had left. I would strongly advice you to re-review this restaurant so that no other one has the same expierence in which my wife and myself had.

Editor's comments: This restaurant has had some serious problem since we reported on it. IT IS NOW CLOSED!!! 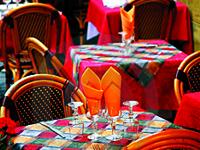 Reviews Update
Some restaurants close down, others change therefore, as we do from time to time, and we now submit an update according to our information.
Gauchos