"The Original Dolphin Safari TM is the best way to observe free-living Dolphins in the area." - Sir David Attenborough

Founded in 1969, the Original Dolphin Safari TM is the longest established and most popular marine safari in Europe. It was stated as the best way to see dolphins in the area by Sir David Attenborough and other international journalists and field scientists. It was also featured in the BBC's "First Eden"; "Lost Worlds"; "Do You Want A Holiday?"; Nick Owen and family's "Good Morning" series; ITV's "The Magic of the Dolphin" and in many publications including the BBC Wildlife Magazine April 1997, '96 and '93 editions. They have been at the centre of the University of Bristol Dolphin Survey and "Green Umbrella" - filming in 1997.

The boat GOLDFIN is a 430 horse power, especially designed to watch dolphins and whales. It is stated to be strong, fast, modern, safe, with all the accommodation necessary inside and outside for a most enjoyable and unforgettable one and a half hour experience.

The on board satellite navigation system can pinpoint any sightings and the boats stable platform is ideal for photographers and filming. Dolphins come so close to their old friend the Goldfin that you may even touch them!

Departures take place 7 days a week every day, except in winter. This year they will close at the end of November and be back in action again from March next year. The Goldfin is also available for private trips, charters, holiday expeditions, professional photography and filming. 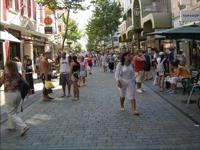 Its window shopping time!
With Christmas just a few weeks away, its time to get in the mood.
Parachuting & Skydiving on Costa del Sol