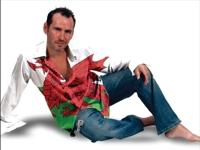 Life begins at 40, so they say! In the case of Stephen Lloyd-Morgan it really has! This is the story of a Ā‘Jekyll and HydeĀ’ lifestyle Stephen has chosen to live on the Costa del Sol.

StephenĀ’s open and friendly face does not give away how hard he actually works, and how determined he is to succeed. A patriotic Welshman from the Rhonda Valley, South Wales, Stephen works as an investment banker in Gibraltar, and during the week he travels back and forth to work from his house in the residential area of Duquesa Golf. In the evenings, however, he entertains audiences along the Costa del Sol with his professionally trained classical voice, singing a wide range of songs to suit all tastes. Hence he calls himself a bit of a Ā‘Jekyll and HydeĀ’!

Stephen moved here with his partner, Nick Holland, in April 2006 but didnĀ’t manage to live here full-time until 9 months later. During this time he split his week between Spain and the UK traveling backwards and forwards between the two. Although his life and home was in Spain, financially he needed to make ends meet by carrying on with his banking career in the UK. Stephen and his partner did not make the move here lightly. They took 2 years thinking about it after discovering the Duquesa Port area whilst on holiday, giving them a taste of what the Spanish lifestyle could be like. They both prefer this end of the coast, being a calmer and quieter area to live in.

Before moving to Spain they lived in Hastings, and after 10 years of working in investment banking, and at the age of 32, Stephen decided to go into acting. He had trained initially as a classical singer and had worked the cabaret circuit and now felt it was time to push further on with that side of his two careers. He enrolled in drama school and whilst on his course would commute to the City of London and then on to drama school. He was so tired that in the relaxation classes he would actually fall asleep!

After giving up his banking career and concentrating on his musical career Stephen performed a number of musicals and operas in the UK and Ireland but found that after a while he missed using his brain and therefore made the decision to go back into banking. He is the sort of person that has to stretch himself, at the moment he is half way through doing a MBA Masters Degree with the Open University.

As from February this year Stephen brought back his singing career and is now so popular he has a dedicated following. He calls it Lloyd-Morgan sings Lloyd Webber! Working both sides of his life is certainly very tiring and because of his day job in Gibraltar he limits his performances to 2 or 3 times a week. Although he thoroughly loves living on the Costa del Sol he admits as a foreigner it is not easy Ā– the lifestyle may be more relaxed but you have to work just as hard as in the UK, if not harder.

Singing is something Stephen has done his whole life, something that is essential for him, and he has an absolute passion for. Of course his roots as a Welshman and the fact that his father is a singer who runs the local Working ManĀ’s Club may have had something to do with it, but he feels fortunate to have a skill that he thoroughly enjoys. Being able to go to drama school later in life was certainly a bonus for him and now he has the best of both worlds, musical theatre and banking.

Another string to his bow on the Costa is singing at weddings.  His popularity has grown so much he actually has to turn some down. He was asked out of the blue to sing at a wedding in Benalmadena, the previously booked singer couldnĀ’t make it, and was such a hit that his phone hasnĀ’t stopped ringing since. He is asked to sing songs from Ā‘Ave MariaĀ’ (Schubert) to Ā‘Can You Feel the Love TonightĀ’ (Elton John/The Lion King), but he does point that you do get asked to sing the same songs. He doesnĀ’t remember how many times he has sang Ā‘A Moment Like ThisĀ’ (Leona Lewis) or Ā‘From This MomentĀ’ (Shania Twain)!

So what about relaxation time? Well, although he really does not have much spare time, he likes to spend time on his terrace socializing with his friends, having barbeques and a few drinks. He has far more friends here than he ever had in the UK! He feels that this is really what it is all about, part and parcel of living in Spain and why we are here. Twice a week he also enjoys eating out at a local fish restaurant and this helps him with his Spanish, which he doesnĀ’t have enough time to learn, although he does have Spanish friends who are helping. After living on ready meals in the UK he loves Spanish food and feels his lifestyle now is so much healthier.

If you would like to catch one of StephenĀ’s performances have a look at his website www.fhmgt.co.uk. He is certainly worth checking out!

Hello Steve. It's hard to believe that 17 years have elapsed since we first met. I still like to think that I played a significant role in your success story. I read you biog with somewhat mixed emotions. I have myself taken on a new lease of life albeit a million miles away from yours. I am a recovered alcoholic and have, indeed abstained from any drink for well over a year. I was probably at my worse the last time we met. Please acknowledge the fact that my memories of our very often turbulent relationship remain with me. I'd just like to know that this correspondence has been read. You can get a glimpse of me on Facebook. I'm not interested in forming any kind of alliance but you did once tell me that you'd like to be kept updated on my well-being. S4C have commissioned me to write some kind of autobiograhy. I can't imagine why. I can think of dozens of people with far more colourful pasts than mine! Hope you'll get in touch. Bye for now 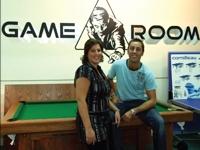 Real People: An Exemplary Couple!
Game Room Marbella, based in Estepona, is a fast growing business run by a Mancunian couple Ian Kennedy and Fleur Harris, who have managed to fill a gap in the market, furnishing unused basements, out of vogue home gyms or any large space with stylish, up-to-date games equipment.
Real People: Victor OĀ’Gilvie, a life dedicated to music

The Real People of the Costa del Sol - Ian Radford