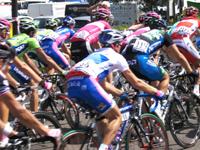 For the first time in its 104 years of history, Le Tour de France came to the streets of London on Saturday the 7th July and brought with it its carnival atmosphere.

With crowds two to three people deep, the start of the largest annual sporting event in the world kicked off with its noisy but eagerly-awaited celebratory promotional caravan.

Pens, key-rings, sweets, T-shirts and hats were lobbed through the open windows of vehicles to the delighted cheers of awaiting spectators - grown men fighting children for the free goodies.

Meanwhile the greatest names in cycling whizzed past on their aerodynamic cycles preparing for the 7.9km (five-mile) prologue time trial around London's central streets. And bikes were everywhere.

Much of central London was closed to motorists but an additional 11,000 temporary cycle parking spaces were on offer
.
Robbie McEwen bounced back from a late crash to win the first full stage of the Tour de France after an enthralling bunch sprint in Canterbury.

The Australian looked out of contention with three miles left, but somehow snaked through the peloton to prevail.