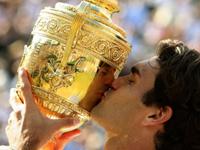 World number one Roger Federer has captured his fifth consecutive title at Wimbledon on Sunday the 8th July.

His five-set victory over Rafael Nadal was his 11th Grand Slam win, putting him three behind Sampras' total of 14. "I'd love to equal his record," said Federer, who matched Bjorn Borg's mark for consecutive Wimbledon titles.

Federer described Sampras, who won seven Wimbledon titles, as "maybe the greatest player we've ever had". "To break his record is not the easiest thing," he said. "It has taken me five Wimbledons and three Australian Opens and three US Opens just to get close to him. It just shows what a great player he was."

Swiss star Federer admitted he was honoured Borg, who also has 11 Grand Slam titles, was in the Royal Box to watch this year's men's final. "It's very special when greats come and watch you," he said. "I didn't expect Bjorn to come down and give me the trophy, but I saw him up in the stands. Maybe it made me a bit more proud of myself."

"I definitely feel I'm mentally and physically still fit to go on for many more years to come."