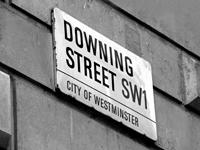 The Prickly Pair examine some of the most recent news and offer some simple solutions to some problems.

Last month I took a peek at Englands situation as presented by the press. It seems obvious there are some simple solutions to problems and that some of the circumstances that cause problems and get up peoples noses could possibly be assembled and solved with other problems and hey presto! Put England back on track. So I dropped a line to Mr Brown, Ill let you know if he gets back to me.

Of course one of the most recent and relevant bits of news is that now Britain has a new Prime Minister, Gordon Brown. Therefore I expect nothing will change there, apart from his wifes wardrobe and attitude.

Still its nice to see that some things never change, Cherie Blairs parting words to the gathering Press were something on the line of I wont miss you lot!. Though I noticed she never said I will miss the freebies, thats because shes a barrister and those people are very clever with words. Maybe she will be suing for loss of her human rights, I am sure she really did think those freebies paid for by tax payers were her human rights.

The next bit of salient news was about the judge accused of exposing his right honourable member. He got off apparently because he was wearing Calvin Klein underpants, although this has never seemed to stop male models, and because he also mentioned that he was happily married and could not perceive deriving any satisfaction from exposing the said honourable member.

What is he saying here? Once you marry the desire to expose your penis becomes non- gratifying? Maybe those Calvin Kleins were not his, may be his lordships lack of penis exposure would explain the smug grin on his wifes face as they left Court. His lordship further explained that the train was packed with fellow commuters of similar height, colour, clothes, etc as it was an area for professional commuters, possibly civil servants, judges, politicians and other professional types. It seems to me that what he is saying is that the train was packed with so many pr..ks that it was impossible to identify one particular pr..k.

Would you believe it? According to the press the Goblin Teas-made is back in fashion again, after losing popularity, when it was revealed that John Major ex P.M. used one, although I dont think thats any way to talk about Edwina Curry.

Schools are also having a change by way of teaching gender awareness. Thats easy children! If you have a willy you are a boy! And, out goes science! What no test tube chemicals? Oh, but thats probably all right because in history pupils will be invited to study speeches by Osama Bin Laden and, lets face it, once students finish his course, they all know their way around chemicals. In fact I would not be surprised if they could not assemble a small bomb factory.

Now a quick solution on the smoking ban. If non smokers want fresh air they should go outside. Simple!

The N.H.S. is being allowed special facilities for gays, lesbians and ethnic minorities but apparently still have the hated mixed wards. My simple solution is to put gay men with the women and lesbians with the men There you are, sorted!

Golf Clubs with more than 25 members cannot discriminate against women. Does this mean that as long as the women are old farts, self opinionated and dress weird they can fit in no problem?

The hunting ban, the prison overcrowding and paedophiles are crying out for an efficient and simple solution. The solution stands out and is crying out to be implemented solving 3 problems in one go. Forget the foxes, lets have paedophiles hunting instead. I could think of nothing more satisfying than seeing a paedophile being ripped apart, limb by limb, by a pack of poor unemployed hounds.

Did you hear about the Polish man who woke up from a coma 19 years later to find himself in a democratic country? I thought that most Polish fall asleep in the back of a lorry and wake up in England.

Jealous Alonso accuses the British press for not being fair on him saying that in Spain he gets more respect. Well there you go! To be a hero in Spain you just have to drive fast. 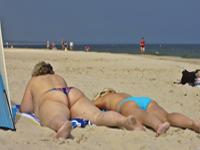 It's a Fat lazy summer say The Prickly Pair
The Prickly Pair give us some advice as to how to prepare our good looks for the coming summer.
Hells Belles, Posh or not?

The Prickly Pair say "You are what you eat!"