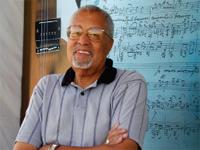 Synonymous with good music on the Costa del Sol, Victor OĀ’Gilvie has been bringing top international acts to these parts for years now.

He has thrilled thousands of tourists and residents alike by offering them the chance to see some of the greatest performers right here in Marbella. LetĀ’s face it, although this is a glamorous spot on the map, it would struggle to compete with the larger cities of Europe in attracting top music acts to its events. So much greater, then, is the achievement of Victor, who year after year has brought big names and class acts to this part of the world, ranging from highly acclaimed visits by the likes of BB King, Ray Charles, Gloria Gaynor and Paco de LucĆ­a to the hugely successful concerts of Elton John and George Benson.

The born New Yorker first started organising events with friends when he was at college and later became became a talent agent with Queen Booking Agency. Working with the likes of Aretha Franklin, Jerry Butler and The Impressions would form the beginning of a fascinating career in music that is still going strong over 30 years later. Ā“I guess I was lucky enough to have a lot of diversity in my career, I think that helps to account for the continued fascination I have for my work. If you donĀ’t love this business it is pretty hard to keep putting so much energy into it.Ā”By the time he was 30, Victor had already established OĀ’Gilvie Management Associates, which arranged tours of Europe and produced live shows for the city of New York. The young impresarioĀ’s contacts were ever-widening to include Dan Whiteman and legends such as Frank Sinatra, Trini LĆ³pez, Dean Martin and Sammy Davis Jr., so it didnĀ’t take long before Atalantic Records snatched him up.

Back in the late 50s he had spent several happy years as a student in Madrid, so when his father died in 1974, the OĀ’Gilvies took the plunge and moved across to Southern Spain. In the same year he laid the foundations for ICP, organising and producing the First International Jazz Festival of Marbella at the bullring in Nueva AndalucĆ­a. It was the beginning of a long list of distinguished events organised by him, not only here, but also in other parts of Spain, Portugal, Italy and Southern France. On 28th July, Victor is organising a night of three masters: GEORGE BENSON, AL JARREAU and JOSĆ‰ FELICIANO at the Estepona bullring and plans to bring many more top artists like this in the future.

Ā“Organising these events takes a lot of energy and can be nerve-wrecking sometimes, but when it all goes off well and you see the reaction of the crowd and the enjoyment of the musicians, it is very rewarding.Ā” The secret of his success? Ā“ThatĀ’s down to knowing what people want to hear.Ā”

Can you please get a photo from Victor, or do you have one in your records?