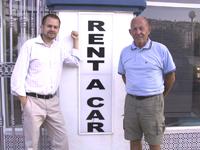 Still on our quest to find the Real People of the Costa del Sol, we now present Linus Hansen and here is his story...

After driving for 3 days through thick snow in his old Volkswagen, little did Linus Hansen know that the 2 months planned break on the Costa del Sol would actually turn into nearly 11 years of stay. His journey started just outside Malmö in Southern Sweden where, after studying Economics and completing his Military Service, it was time for a rest and visit his uncle Bruno.

He had visited Spain many times before as a child, so when in 1996 his uncle Bruno gave him the chance to stay and work for him, it was the perfect opportunity for Linus to move on. His uncle, who came to Spain earlier in 1982, had built up Brunos, a small car rental business, and, with Brunos coaching Linus soon picked up on the ins and outs of the job. Working together since, they successfully built up the business to what it is today. From their office in Puerto Duquesa they also run a car sales and car parking business to include the airport.

His Spanish girlfriend and her large family have opened up the Spanish world for Linus and he has no regrets whatsoever about moving here, although he is very proud of being Swedish and will never forget his roots. He has a balanced way of thinking and understands there are ups and downs wherever you live and in everything you do, although he freely admits he is a workaholic. He tries to keep the business separate from his private life but with the type of business he is in the two do mix occasionally. Service businesses can be hard going, especially when you have to be available 7 days a week, 365 days a year.

Linus enjoys the simple things of life like eating out and being with friends or maybe driving out somewhere or going for a walk. Of course, looking after his house takes up some of the spare time. He enjoys Spanish food, which is very different to Swedish food, although he feels it is debatable how healthy it is.

Linus is not frightened of hard work that is why he is so successful. As he pointed out, over the years he has seen many businesses come and go, especially bars and magazines. He doesnt understand people who expect to set up business successfully after only being here for a week, they should realize you have to work much, much harder to make it here than almost any other place. Well, Linus has certainly proved it!