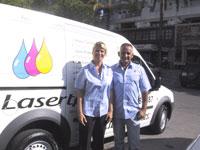 A Company that supplies the likes of IKEA, Barclays Bank and Liverpool FC with inks and office supplies has now opened in Estepona: Lasertech.

Lasertech Espana, the Office Supplies company from the UK continues its expansion along the Costa Del Sol with an new operation focussed on the Sotogrande and Estepona area.  It is managed by Steve Dawes who conducted a lot of research before setting up Lasertech Estepona.

Steve said, In Spain theres a choice between expensive original brand inks and toners or very cheap but unreliable refillsour alternative is our own brand compatibles that offer the same quality as original brands but at lower prices.  Our Lasertech brands are factory produced to certified international standards.   The key is the IS09001 certificateour products are certified, refills arent.'

Lisa Steer, Partner in Lasertech Estepona adds, Of course, we do sell originals to customers if they insist but they really should consider our rangeprinting costs account for such an ongoing expense, it makes sense to consider quality alternatives.

Lasertech Estepona give customers money for used inks and toner cartridges as part of their recycling programme.  Yes, its true, said Steve, we will pay for your old rubbishif we can recycle we do.  In fact under new EU Legislation (the WEEE Directive) covering the disposal of all electronic waste, all companies are liable for inspection regarding their disposal of waste, so having Lasertech actually pay for rubbish rather paying someone to remove it, makes a lot of sense.

In addition to inks and toners, Lasertech also offer a full stationery range of over 12,000 items in their new 2007 Catalogue.  Ranging from paper clips and till rollers to bigger items like printers, shredders, laminators and tills, it is one of the most extensive in Spain.

Lisa is also keen to stress Lasertech prides itself on giving customer help.  We know buying the right product whether its a printer, shredder or just the right ink can be confusing well gladly give assistance to customers.

Lasertech is one of the UKs biggest suppliers of Office Products in the UK supplying companies such as Ikea, Barclays Bank PLC with inks, toners and stationery.

Lastertech Head Office is in Marbella with other outlets along the Costa del Sol and Costa Blanca.  Established in Spain in 2004, Lasertech now has over 800 business customers.  Lasertech UK was establishe twenty years ago and now has over 80 outlets in the UK and Ireland.

What an excellent service this company offers, and Lisa and Steve add the "personal touch", which is sometimes lacking in todays business world. We will definitely be giving them a try!!

Other related businesses
ROCK CONCIERGERIE MONTECARLO
Follow us On 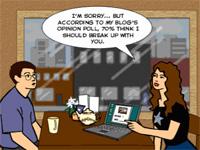 Are you blogging?
If you are not doing it, you could well be missing out according to Belinda Cordell.
Become a legal resident of Spain and still avoid taxation

In my opinion: Johnny no mates

Income down, rents up?