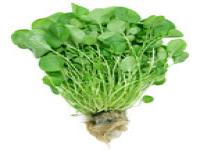 Raw watercress adds a peppery yet smooth edge to dishes and is highly nutritious. It can be used in salads, in place of the ubiquitous rocket, or as a sandwich filling. It is a classic soup ingredient and when cooked has a milder flavour. It's also great in juices and gives carrot-based drinks a lovely bite.

Watercress has been cultivated since Roman times. It is referred to in Irish poetry from the 12th century and has been grown in southern England since the early 1800s. Watercress was once popular as a tea, freshly made with lemon and sugar and it has been used throughout history in Europe and Asia as a tonic for various ills.

Watercress is a member of the mustard family and related to garden cress, it is a fast growing semi-aquatic plant that thrives in slightly alkaline water.

Nutritionally they are rich in vitamin C, calcium, iron and folic acid; it is a cruciferous plant containing anti-cancer chemicals, such as beta-carotene and flavonoids. Look for crisp leaves with a deep green colour. Watercress is very perishable but can be kept in good condition for a couple of days by refrigerating, with the stems in a glass of water and covered with a plastic bag.

The proper name for watercress is Nasturtium officinale. Nasturtium is Latin for 'nose twister' and is a reference to the plant's pungency. Belonging to the mustard family, Watercress is a cruciferous vegetable that originated in the Middle East. Xenophon, the ancient Greek general and the Persian King Xerxes ordered their soldiers to eat it to keep them healthy.
The Romans ate it in the optimistic belief that it would prevent baldness, an old wives tale that they carried to early Britain. Growing in shallow water, as it does, it grew wild in abundance, but was finally cultivated in the mid 16th century, probably in Germany.

Nicholas Culpeper, in his Complete Herbal writes that cress soup was a good remedy to cleanse the blood in the spring and help headaches. Herbalist Gerard (1633) recommended it for the "greensickness of maidens." And Francis Bacon advised that it would restore youthfulness to aging women. Today watercress is probably best known as a soup ingredient, although it has many other uses and is wonderful as a change from lettuce in a green salad, chopped into cooked pasta or in a number of inventive stuffingĀ’s for fish or poultry alike. 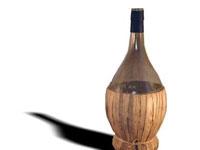 Salute!
Chianti is possibly ItalyĀ’s most famous Red Wine and has a history as rich as the countryside that produces it
Five easy, Low Cost New YearĀ’s Resolutions

Too wet without one?

What to drink with Christmas Dinner