Am I the only one to have noticed how small the favourite chocolate bars have become? Asks Bellinda Ainslie

With the gorging season just ahead, the chances are that a well intentioned hostess is going to thrust a seasonal treat of some kind under your nose, sooner or later.

It is unrealistic to think you might avoid this unnerving custom and your best defence is acquiescence. There are a small number of masochists, who will valiantly try to dodge being stuffed to the gills by various half cut, tray wielding domestic demonesses, but in the end, no form of evasive self preservation, will save you from these women and a graciously accepted hillock of pastry is easier in the long run.

However, having an over-analytical mind myself, I do tend to run through the Christmas menu with a fine tooth comb every year, and it has been my considered opinion that all forms of chocolate are suffering a kind of Gulliver syndrome.

Now take the traditional Quality Street or Roses tin of chocolates; here we had in the past, what amounted to a gargantuan task; getting through this titanic stack of chocolate by New Years Eve without acquiring arteries like Victorian guttering was not something to be taken on by the faint hearted. In the past, I have put this phenomenon down to the realization in adulthood, that a great many of the things one thought huge as a child, appear much smaller as an adult. It would be most comforting to be able to leave it at that, but as with all the great mysteries in life, the simplest explanations throw up all kinds of nagging doubts.

Now let me wander off on a small tangent if I may; I have very small hands, in fact, I think my hands stopped growing from the age of 11/12 (although they are just the right size, according to my husband) whatever he means by that? But what in gods name has this got to do with chocolate? I hear you cry. Well, in the name of research, and having nothing better to do; I set about rifling through some old photos and lo and behold there was the 11/12 year old, angelic, yet slightly raffish Bellinda holding a Mars Bar at a jaunty angle. The size of said Mars Bar in relation to the size of my prepubescent hand, on close inspection falls somewhere in the region of a respectable 5 (again, I have my husbands estimate to go by here).

So, leaving my heady, naïve, carefree chocolate eating days behind; we come back, reluctantly, to the present proportions of the modern day Mars Bar. I have had the pleasure of getting my hand around this innocent little treat recently and there can be no denying, it is not quite the handful it used to be. So armed with photographic evidence, and the assurance from my husband, that is no 5s I can only assume therefore, that Mars Bars have been getting smaller over the years. This worrying trend doesnt just stop at the once mighty Mars Bar; many other famous sweeties have been going the same way. The makers of Mars Bar have been tackled over this vital issue in the past and a representative for Mars told the BBC that They were saving us from ourselves it was at roughly at this time that the Fun size Mars Bar was introduced (although why the makers of Mars thought that by making something smaller it becomes more fun is quite beyond me).

Living in Spain, we are supplied Mars Bars by Master Foods France so, there we have it and I need look no further for an explanation for the inadequacy of the previously, more then a mouthful Mars Bar. The size of a chocolate bar may seem of little importance, but if we allow the small things to slip through the net, who knows what will suffer down-sizing next, and anyway, I am not alone in lamenting the inadequacy of the modern Mars and I am sure Marianne Faithful will join me here in saying enough is enough! 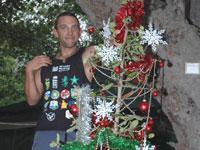 Less is more
Decorating the Christmas tree is a lesson in snobbery according to Bellinda Ainslie
Local businessman to appeal and car for sale on Eboy?

Yer but, no but