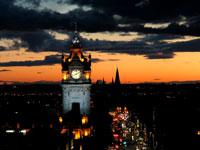 Hogmanay is the Scots word for the celebration to welcome the New Year. Traditionally it runs from noon on 31 December to noon on 1 January, but it is now generally taken to mean the whole New Year festive period; the festivities often continue well into the New Year, even up to the 2nd of January. It is a time of hope and looking forward to a better year.

The celebration of Hogmanay can be traced back to the pagan practices of sun and fire worship in mid-winter. The Roman festival of Saturnalia involved great festivities with lots of wine and food, as well as more lascivious goings on. The Vikings celebrated Yule, beginning on the shortest day of the year with sacrifices to the Norse gods and continuing for a number of days. The customs of Hogmanay probably combine elements of both of these plus elements of druidic winter solstice practices.

Following the Scottish Reformation in the 1560s, celebrating Christmas was frowned upon by the rather dour version of Calvinism introduced by John Knox and his successors, who believed it was too superstitious and too Roman Catholic. This was taken so seriously, and preached so vociferously in parish churches, that the celebration of Christmas was effectively banned, except in its pure religious sense. However, while the reformers could ban Christmas, they were unable to do the same for New Year. The celebrations were forced to go underground during the Interregnum under Oliver Cromwell, who banned Christmas in 1651, but it re-emerged in the late 17th Century.

Right up until the 1950s, Hogmanay was the major festival of the winter season. Christmas Day was a normal working day in Scotland until the 1960s and even into the 1970s in some areas. Instead, people took holidays over the New Year period, 31 December to 2 January, with all the feasting and gift-giving which is now associated primarily with Christmas. By the 1980s/90s, Christmas had once again become a huge festival, due in large part to the waning influence of the church and the increasing effect of 'international' cultural traditions. However, despite Christmas Day and Boxing Day being made public holidays in the 1960s, as they had been for years in England, Hogmanay is still associated with as much celebration as Christmas in Scotland, if not more. Indeed, both the1st and 2nd of January are public holidays in Scotland whereas in England only the 1st of January is a holiday.

No one is really sure where the word Hogmanay comes from. The Gaelic phrase for Hogmanay is Oidhche Na Challuinne, meaning 'the night of the new year.' On Shetland, heavily influenced by the Vikings, New Year is called Yules. The word Hogmanay can be traced back to 1696 with reference to someone singing a 'hog ma nae song.'

The Oxford English Dictionary dates Hogmynae-night as a festival as far back as 1680. Some possible origins are:

There are many customs associated with Hogmanay throughout Scotland, some local, some national. There are ceilidhs and parties all round the country, from small family gatherings to the city centre revelries attended by tens of thousands of people. Many of the local customs involve the use of fire; it is said that this symbolises lighting the way into the coming year and carrying the light of knowledge into the future, but it is more likely to be a left over from pagan midwinter rites, when fire was very important.

Perhaps the most famous custom associated with New Year around the world is the singing of Auld Lang Syne. This traditional Scots song was made famous by Robert Burns; he didn't write the original, although it is thought that he wrote the 3rd and 4th verses. Normally, however, only the first and last (5th) verses, with the chorus, are sung.

It's become traditional to join hands in a circle during the first verse, then to cross your hands in front of you and join hands again for the last verse; this brings everyone in the circle closer together, which just reinforces the sentiments of the song. Don't worry if you don't know all the words. Many people will sing something like, 'should auld acquaintance be forgot, la lah la lah la lahh, la lah, for auld Lang Syne!' The important thing is showing willing and being with friends and of course, seeing if you are still capable of standing up at the stroke of midnight! 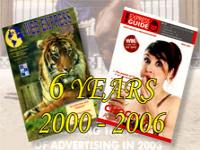 Happy Birthday!
This month we celebrate our 6th birthday and look back at a few milestones from those years
The Passion of Christ

Diamonds are a girl's best friend!