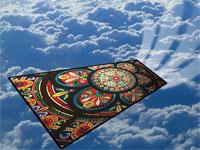 Morocco's history and the story of Moroccan weaving began with the Berbers, the indigenous people of North Africa who had inhabited Morocco for centuries before the first Arab invasion in the seventh century. Today, the major weaving groups of the Middle Atlas and High Atlas mountains are Berber tribes, many of whom still live much as they did centuries earlier.

While remarkably diverse, Moroccan flatwoven and knotted pile rugs are almost without exception bold in colour and lively in pattern. Designs are made up of geometric motifs arranged in seemingly endless variations. Each tribe has its own distinct repertoire of designs and colours significant to the ceremonial and day to day life of the group. These same patterns can be seen in the art forms relating to other areas of tribal life such as ceramics, architectural decoration and the tattoos worn by Berber women. Although a weaver draws from the vocabulary of designs particular to her tribe, she works at her loom without a diagram or pattern to guide her. As a result, each rug is a unique creation, a celebration both of her tribal identity and her own artistic imagination.

The colours of North Africa have been celebrated for centuries by well known fine artists from the west; Delacroix, Matisse and Klee for example. Somewhat less widely known but no less significant is the historic connection between Moroccan art, and rugs in particular bearing 20th century western design. The simple geometric patterns of Moroccan carpets have long been used to enhance sophisticated modern furnishings and interiors.

The brightness and warmth of oranges and saffron yellows or the neutral beige ground Beni Ouarain rugs are being utilized anew in contemporary interiors. With their hand spun wool and authentic indigenous character, these one-of-a-kind rugs have an organic quality not found in their factory made counterparts from other areas of the world. With Morocco practically on our doorstep it is possible to pick up a bargain on a day trip and a Moroccan rug will add warmth and style to any home; plus a timeless quality for years to come.

And so to bed!