Icelandic businessman Eggert Magnusson has reportedly stepped up his bid to take over West Ham by submitting an improved offer to the club's directors.
To underline the seriousness of his bid, Magnusson has also appointed Mike Lee, former communications director for the London 2012 Olympics, to handle his public relations.
If West Ham chairman Terry Brown is tempted by the offer, his next move will be to give Magnusson permission to consult the club accounts.
West Ham have been the subject of takeover speculation for several weeks and manager Alan Pardew has recently called for a resolution to the situation.
"If we can resolve this as quickly as possible, that would be the best scenario for everybody," said the Hammers boss.
Iranian-born businessman Kia Joorabchian had declared an interest in taking over the club but his bid has so far failed to materialise. Whatever the outcome, Magnusson, who is the mastermind (no pun intended) behind the takeover could solve the clubs present financial difficulties. West Hams official web site had no information on this or any other takeover bids to date; but this lack of information for fans and supporters is nothing new for West Ham, who seem to operate a policy of springing unpopular decisions on its followers at the last moment. 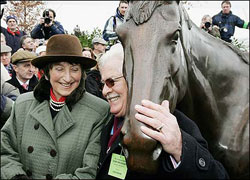 A life-size bronze statue of triple Cheltenham Gold Cup hero Best Mate has been unveiled at Prestbury Park.
The late champion's owner Jim Lewis, trainer Henrietta Knight and Cheltenham racecourse chairman Lord Vestey were among those at a special ceremony.
Lewis said: "This is a fitting tribute to a much-loved racehorse.
"He is here where he belongs, where everyone can gaze upon his beauty and his grace and remember his three Gold Cup victories."
Knight added: "It is a very moving moment in the history of Cheltenham. We watched this bronze being made when Best Mate was alive. Philip Blacker has done a wonderful job."
Best Mate, winner from 2002 to 2004, missed last year's race after breaking a blood vessel and died when making his seasonal reappearance at Exeter in November.
He is the fourth horse to be honoured in bronze at Prestbury Park. The others are triple Gold Cup victor Arkle, five-time winner Golden Miller and Dawn Run, winner of the Champion Hurdle and Gold Cup.