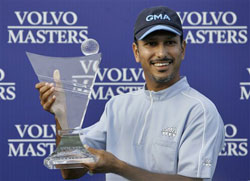 Indian star Jeev Milkha Singh announced himself on the world golf stage as he won the 2006 Volvo Masters by a single shot from Sergio García, runner-up for the third successive year, Luke Donald and Padraig Harrington, whose second place piped Paul Casey for the European Tour Order of Merit.

The 34-year-old from Chandigarth shot a final round 72, one-over par in a tension-filled day as the final destination of both the Volvo Masters title and the European Tour Order of Merit went down to the wire.

My win in the Volvo China Open was big, but this Volvo Masters victory is massive, said Singh, adding, Not only will I be back to defend my title at Valderrama next year, but I will be at the Volvo Masters of Asia in Bangkok in December to see if I make it three lucky Volvo titles.

Singh took time out to congratulate Allen McGee, the Volvo Masters Amateur World Final winner, saying, Golf is all about the amateurs. They make us what we are and having come through 77,000 to win is an amazing feat.

Meanwhile, Spanish favourite, third for the third year running quickly overcame his disappointment, saying, Well done to Jeev, it takes a lot to win this and personally I can only take positives from my performance.

Irish star Padraig Harrington had an anxious hour-long wait in the players Im delighted, very proud and hope to represent Europe with distinction, he said, adding a word of sympathy for leader Paul Casey, commenting, Sure, I feel for Paul, he was sick for two days, but sometimes thats the way things go in this game.

The third member of the all-Ryder Cup runners-up triumvirate was Englishman Luke Donald, who finished alongside Garcia and Harrington on one-under-par, whilst Swedes Niclas Fasth and Johan Edfors had disappointing days, as did English duo Lee Westwood and David Howell.

Summing up the 2006 Volvo Masters, Mel Pyatt, President & CEO of Volvo Event Management said, time and time again, the drama and emotion the Volvo Masters can generate over the final nine holes is remarkable, and this year is no exception.

Many congratulations to Jeev, adding the Volvo Masters to his Volvo China Open crown and it is a great result for the Asian Tour and for golf in India, he said, adding, It has been a fitting conclusion to the 2006 European Tour and my congratulations to Padraig Harrington for clinching the Order of Merit.