In some cases it may be too expensive and take too long to recover a debt through the Courts with the help of a lawyer. For this reason there exists a Â“Small Claims ProcedureÂ”.

Normally, in order to appear in a Court in Spain, you need to go through a lawyer who then needs the use of a Procurator to represent you at the hearing, but in cases of claims amounting to under €900, you can avoid the expense of these intermediaries altogether.

You can also enter a claim on your own behalf through a special fast process named “proceso monitorio” which tantamount to an application for enforcement of judgement for payment of a debt. For this the amount must not exceed 30,000 Euros but you must provide evidence of your claim, though you cannot bring further action if the debtor does not pay.

The process is quite simple really, though you do need to communicate in Spanish.

In the first instance these claims must be submitted to the Clerk of the Juzgado de Primera Instancia. If in doubt you can always ask for some assistance at the (Secretaría) the Court’s office.

Suitable claims forms are usually provided for both types of small claims. If a form is not available or you cannot use one, in cases of less than €900, you can submit a claim anyway (demanda) in a simple form stating your details, the debtor’s details and what you are claiming for, with evidence of the claim.

In respect of amounts above this limit and under €30,000, you should also enclose a report giving the facts of the dispute with supporting evidence and the legal reasoning in support of the claim.

The Court will notify the claim to debtor for a voluntary payment within 20 days. The debtor can also oppose the debt within those 20 days, giving enough legal reasons for withholding the payment.

Effectively the debtor can choose not to do anything, not pay nor oppose the debt; in such a case the Judge will then order execution of the debt against debtor’s assets.

He could pay the debt, in which case the matter is solved or he could oppose it with the intervention of a lawyer and a Procurator, in this case the Judge will convoque the parties to a Court Hearing.

There are no administrative charges made by the Courts in Spain, but of course if you go to trial the costs to be considered include solicitor’s and barrister’s fees, cost of publication in official journals, deposits needed for appeals, expert fees. These costs would normally be expected to be paid upfront; this is because the system is governed by the “loser pays” idea.

I would also like the link to the form and information.

Editor's comments: The forms for the "proceso monitorio" are available at your local Juzgado de Primera Instancia (Court House). Ask at the "secretaría" secretary's office. After completing the form, you have to submit it to the Secretaría with evidence of your claim. Keep copies for yourself.

Really good information thank you can anyone send me the link to download application for small claims up to the value of €900 or the demanda form??? 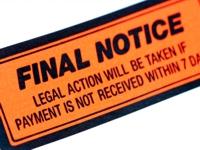 Debt Recovery
How late can one make claims in Spain?
Ask for your rights: Buying off plan - PART 2

Buying a business in Spain