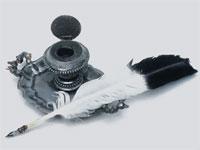 Hand me that sword!

A big thank you to all the lovely French people who wrote to me after last monthĀ’s article.

Unfortunately I donĀ’t speak French and was therefore unable to understand your correspondence; they do say that French is one of the worlds most beautiful languages (well the French do) however, some of the words I looked up in the phrase book werenĀ’t very beautiful at all! I can only assume therefore, that I may have inadvertently upset some of my French fans? As a caring humanitarian this startling revelation comes as a knife to my heart and all I can say is Ā“mon cul a votre disposicion!Ā”

Edward Bulwer Lytton once said Ā“The pen is mightier then the swordĀ” and in the hand of Mr. Lytton it may well have been, but as a weapon for the average man or indeed woman come to that, the humble pen can become a lot more frightening than any sword you are likely to encounter.

Ex pats from all over Europe have come to roost in this glorious part of Spain, there are even some French! And by and large, the majority of settlers tend to behave themselves. However,  a small contingent seem to suddenly develop an overwhelming desire to take up their pen and proceed to bore to death as many people as possible by churning out a never ending stream of drivel. Now, if back in your own country you were a hairdresser, in the SAS, a milkman or aircraft engineer, then that is what you were.

James Bond is a secret agent and I wouldnĀ’t mind betting that he never had a summer job at Burger King, by the same token, Shakespeare is remembered as a writer; nowhere in history does it mention that before taking up his mighty pen, Mr. Shakespeare had a burgeoning career emptying middens.

To actual writers (those of us that do it for a living) this deluge of boring, waffling old nonsense creates a niggling little problem. If you pick up a magazine and find yourself confronted by the never ending, never interesting, saga of some boring old farts earlier life as a younger fart, then you may be, understandably, wary of picking up a magazine ever again.

This is the problem therefore for professional writers; the literary waters are being muddied by bored ex pats, with too much time on their hands and a misguided belief that anybody would be remotely interested in what they got up to during their little stint in the army, police force, boy scouts or anywhere else come to that.

Another little group wishing to share their yawn making experiences with us are the Ā“long termĀ” ex pats (you know the ones, Ā“we have been here 10, 20, 30 yearsĀ”) SO WHAT! These people are terminally boring and will proceed to tell you that they remember Ā“when all this was just fields/Fincas/Cockroach farms etc... ad infinitum. The worst of this particular bad bunch are the ones that started businesses here a few years ago and now feel the need to share their knowledge with us, not to mention their hilarious little anecdotes.

It has always been my experience that people who feel the need, and indeed encourage having words like Ā“the warped mind ofĀ” levelled at themselves, usually are the complete opposite and if you are expecting to be greeted by a zany, laugh a minute raconteur, then you are going to be sorely disappointed meeting the only person guaranteed to send you to sleep faster then the Sandman.

The world has shrunk since Ā“warped mindĀ”, Ā“ZanyĀ”, Ā“crazyĀ” guy/gal thought that drifting around  a few bits of the Mediterranean was sooo Bohemian and nowadays Mr and Mrs Average are visiting far flung places that these previous people have never heard of, yet alone visited. The diff erence, luckily, is that the modern traveller doesnĀ’t feel the need to start writing all about their little jaunt (except for the blogs on the interne, but no one takes any notice of those anyway) plus, exercising a far less selfish and cavalier attitude towards their childrenĀ’s future and education by not dragging them away from their schools or potential universities, simply to satisfy their own misguided ends.

The world is full of people who think that their lives have been more interesting then anybody elseĀ’s, but the fact of the matter is, as far back as Georgian times young people were travelling all over Europe on their Ā“Grand toursĀ” so lets face it, there was nothing left to discover here 20-30 years ago that wasnĀ’t already passĆ©. It is also so archetypal British to talk about the Spain of 20+ years previous as if it was some third world backwater; the bloody old nuisances who turned up here at that time, love to use the phrase Ā“undiscovered SpainĀ” which is b*****ks really, as between the Romans, Moors and the Spanish themselves there canĀ’t have been much left for a few drunken, halfwit Brits to stumble upon.

Where I come from there is a very nice Spanish restaurant run by a guy from Seville, he has owned his business in England for over 30 years and in all that time he has never once felt the need to write to the local magazines with uninteresting little anecdotes, he has never claimed to have Ā“discoveredĀ” unspoilt Romford and I have never heard him say Ā“I remember that Southend when it was all just fi elds!Ā” 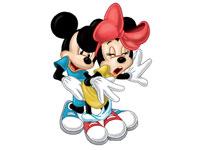 Dreamboat Willie
It seems some people canĀ’t stop Ā“dreamingĀ” about Disneyland popping up in Manilva. This month The Prickly Pair question the reasons why
HOLA!