The food reviews are not advertisements. We visit a different restaurant every month, we pay for the meal and we comment and give points as honestly as we can for the benefi t of our readers. We make a point to visit only restaurants which we believe are worth reporting on.

Introduction
We have seen a number of Japanese restaurants cropping up all over the Costa in recent times. They mainly seem to push Â“SushiÂ”, which as we know has made its mark in Europe where Sushi bars are quite popular. However, from what we have seen here on the Costa del Sol, we suspect that some of these should not be classed as genuine Japanese. Anyone can read a recipe and prepare a dish and we have noticed several restaurants even offering Chinese and Japanese food, the products of two Â“could not be more differentÂ” cuisines and cultures that require years of practise and learning. After all Sashimi or Sushi are raw fish, their preparation requires the skill and know-how of a chef with some years of experience before it is put out for sale to the public. We decided to visit this restaurant because of its varied Japanese menu that includes Sushi and Teppan-Yaki.

The staff
You are immediately welcomed as soon as you step in to check if you have made a reservation. I strongly recommend that you book, especially if you wish to sit for a Teppan-Yaki. Once seated and given the opportunity to settle down, you are presented with the menu and the opportunity to order drinks. We found the service faster at the Teppan-Yaki than at the tables, although I see this is not a derogative remark. I found the staff attentive, offering a service intended to be speedy.

Atmosphere
No traditional yukata or Japanese robes, just a short version of it worn by the staff as a working jacket. Japanese staff, background music, hashi (small Japanese chopsticks) and traditional serving dishes are the elements that make this restaurantÂ’s atmosphere. The main attraction of course is provided at the Teppan-Yaki chef who displays his skills, speed and dexterity in cooking the food on the hot plated table right in front of you. ItÂ’s what they call the Â“Teppan-Yaki ShowÂ”. Salt, pepper mill, knives and spatulas are used with the same dexterity as any good barman worth his soul would put up a show with his cocktail shaker.

The Menu
The set Teppan-Yaki menus are probably the easiest way to make a choice if you are a novice at Japanese and it is a good starting introduction to a cuisine that is very different from what we know. I recommend a small sushi starter, pick one or two from the illustrations; the chances are that you will probably like it. The whole of the menu is extensive, it is all adequately translated into English and Spanish and it comprises Sushi, Sashimi, Tempura, Soups, Noodles and, yes you do also have chicken and beef. If you are familiar with this type of cuisine you will soon find your way about the menus and recognise your favourite dishes.

Wine List
It is traditional to have your Â“SakeÂ” or other drink, including soft drink and some pickles before your meal and not drink with the meal. Of course one can do what one is accustomed to and there is a selection of wines, beers and other beverages that one can choose from. The list does include Japanese beer and liquors.

Starters
Misoshiru
A classic traditional light soup made from fermented soy beans. The ingredients vary according to season or taste but they are mainly tofu and vegetables including seaweed, served in a typical bowl. FBA Â–This is where you can distinguish the difference between Japanese and Western taste. It is a new taste. Personally I liked it; I found it quite pleasant and settling for the stomach which is what it is intended to be.
Team score Â– 9/10

Sushi & Makisushi
Sushi are slices of raw fish served on a cylinder of rice. Makisushi are drums of rice wrapped in seaweed with a centre filling of fish or veg. Very traditional and now very popular everywhere. FBA Â– They say that once you try this and like it, you actually crave for it. I certainly do like it and I do admit I do fancy it. As a starter there was a small selection of salmon and tuna sushi as well as a couple of makisushi. Well presented on a wooden platform with its dipping tray for the soy sauce and wasabi. Undoubtedly fresh, undoubtedly delicious.
Team score Â– 10/10

Main Courses
Teppan-Yaki
For this you need to sit at the bar around the Teppan-Yaki which is a heated metal plate (a large plancha) on which the chef will prepare your meal. There are different menu varieties on offer at different prices. One of our group chose prawns, salmon, beef accompanied by mixed vegetables in fried rice. These menus have their own starters which we skip here as some are mentioned below and above. FBA Â– It was very interesting to see the display of dexterity showed by the chef in preparing the chosen ingredients on the hot griddle, including the rice and mixed vegetables. It is a bit of a show and you can demonstrate your own skill at catching in your mouth the bits of food that the chef aims at you. This is another innovative way to get used to a new taste provided by the condiments used in preparing the main ingredients. The food was fresh, well prepared and very tasty.
Team Score Â– 10/10

Tempura
Usually prawns, vegetables or other ingredients dipped in a special light batter and deep fried. FBA Â– This is an excellent choice if you like fish but prefer it cooked. It is also very traditional and delightful to eat, dipped in the special sauce provided.
Team Score Â– 9/10

Shabu Shabu
If you do not like fish then this is for you. Shabu shabu is cooked in a pot on your table. Sliced beef or pork thinly sliced and an assortment of vegetables dipped into boiling water, as you would do with fondue, then dipped into provided sauces before eating. FBA Â– On this occasion the meat was a very fresh and healthy looking quality beef accompanied by mushrooms, Chinese cabbage, thin rice noodles, courgettes and some more. It was a very large helping and it was absolutely delicious. A rather pleasant new experience.
Team Score Â– 10/10

Desserts:
Fresh Orange
None to speak of but a most welcoming freshly cut orange on the house is most welcome at this point.

Summary
There was no doubt in our mind that the fish served here is traditionally prepared and that it was fresh. The fact that the restaurant seems to be quite busy is a good indication that the ingredients are fresh. The other factor in its favour is that, although Japanese restaurant are usually notoriously expensive, Osaka was surprisingly Â“mediumÂ” as per our key above, therefore very good value for money. We all said we would go there again. 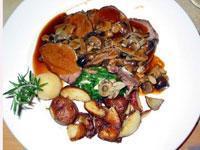 The Slow Boat to China Restaurant

The WXPG Food Review - Looking Back!