Bikinis have been around longer then you might think

Mosaics found in the 4th century villa at Piazza Armerina in Sicily are festooned with women wearing bikinis; and if Hollywood is to be believed, cavewomen wore furry leopard skin bikinis with Mascara, well; at least Raquel Welch did in One million years BC.

But I bet you didnt know that the modern bikini as we know it has been around for 60 years this year! Its invention is attributed to two Frenchmen, Jacques Heim and Louis Reard way back in 1946.

The first bikini was marketed as the Atome this was because its small size was compared to the atom. But its name was changed to the bikini after WWII; experimental bombing near the bikini reef gave the swimsuit its name because it was supposed to cause the same earth shattering effect.

The bikinis we know today are a far cry from the rather staid costumes of the 40s and it was as far back as the 70s that saw the more risqué versions we would recognize as the bikini we know.

The thong bikini was introduced in America in the early 80s and since then the race  has been on to produce smaller and smaller bikinis. The micro bikini is really little more then a couple of shoe strings, and is defiantly not for the faint hearted.

In its short modern history of 60 years, the bikini has managed to repeatedly shock the world with its ever more revealing nature. Nonetheless, the history of the bikini is hardly finished; fashion designers will, without doubt, continue to experiment.

Probably the most famous bikini babe in history was Ursula Andress in the Bond movie Dr No, and whilst we cant all look like that, the bikini will continue to have a huge following. 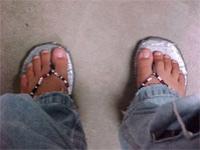 Summer Sandals
Its time to expose your feet again after the chills of winter.
ALL FASHION & STYLE articles