Marbella has elected a gang of Ā“CaretakersĀ” to hold the fort protem.

Marbella town hall is now in the hands of an administrating committee who will run the council until next years municipal elections.

The reasons behind this move are well known; but if you havenĀ’t been following the saga, then, in a nutshell, the previous town hall Ali Baba and his fourty thieves were all caught red handed feathering their own nests with public money.

The whole thing came to a head after years and as a result dozens of arrests were made on some of MarbellaĀ’s previously most influential citizens. After the final tally it would appear that the most popular occupation for the disgraced councilors was the legal profession; lawyers to be exact.

So no surprises there then; Marbella is not unique in having a bunch of Shylocks dipping their fingers in the communal purse; but, and itĀ’s a big but, when one particular group of people show their true colours, you donĀ’t replace them with another group cut from the same cloth.

The sixteen Ā“caretakersĀ” now holding the reins at the town hall are made up of no less then five lawyers. Now it would be very wrong to suggest that all lawyers are shysters, but by simply not electing any lawyers onto the committee would take away the temptation for them, of reverting to kind.

So, that leaves the question of who to  replace them with? Well, how about the local Churro vender? I am sure he would be a lot more honest and at the end of the day, he would know all about getting your fingers burnt. 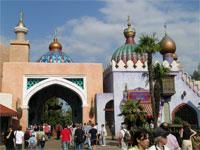 The happiest place on Earth: Disneyland Manilva
Once again there is Ā“talkĀ” of a Disneyland in Manilva!
Concrete Cancer