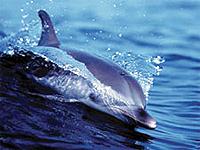 Mankind has had a relationship with whales for thousands of years. Coastal communities have exploited them for centuries, mainly for food and oil.

We are all aware of the dramatic decline in whale populations worldwide due to commercial exploitation and the campaigns to "save the whale".

On August 14th 2003, Iceland restarted its whaling programme after a gap of over 14 years. During 2003, 36 of a proposed 38 minke whales were killed, for what Iceland claims to be scientific research. What need is there to kill for research I'll never know! What we hear less about is that Dolphins are hunted in many countries around the world, with nets, knives, rifles and hand-held harpoons. They are deliberately slaughtered for human consumption, for use as bait, as well as fertiliser and chicken food.
The Japanese hunt of Dall's porpoise is now the largest direct kill of cetaceans in the world, and appears largely unregulated. Between 1986 and 1990, at least 110,000 animals were slaughtered.

Thousands of dolphins are killed every year in cruel, inhumane Japanese hunts. In one incident last year nearly one hundred wild, bottlenose dolphins were encircled out at sea and driven into shore to be trapped by nets in a small bay.

Some fishermen, in their belief that the dolphins eat the fish they wish to catch, often instigate, or turn a blind eye, to the slaughter.

Conservationists believe that the Mediterranean common dolphin, once possibly the most abundant cetacean species living in the Mediterranean, is now one of the most endangered dolphins in Europe and could face extinction if urgent action isn't taken.

It may also not be commonly known, but the Costa del Sol and Gibraltar waters are permanently inhabited by some species of dolphins and whales and often visited by others, including the "Orca".

While visiting Gibraltar or the Costa, you really cannot miss the opportunity to combine a 1┬Į to 2 hours cruise around one of the most visually spectacular and historic bays in the world with the opportunity to see and photograph different species of wild dolphin, occasional whales, flying fish and even turtles and sunfish.