Jose PeûÝin is Spainôs leading wine critic and last year in the UK he presented his 10 favourite Spanish Wines. One of them was Baltasar GraciûÀn Garnacha ViûÝas Viejas. Jancis Robinson, the English queen of wine called it a ôfine offeringô and it was also highly rated by Robert Parker. So what is it about the wine that makes it so highly regarded?

The wine is made from the Garnacha grape which is the most widely planted in Spain because, like many of us, it likes the warm weather. It is often blended with the Tempranillo grape to make Rioja and it also appears in the expensive wines of Priorato. New technology has helped the vinification of wine made from Garnacha grapes and its quality is being more widely recognised. In addition the grape makes very good rosûˋs.

It is only possible to make good wine from good grapes and this is one of the special qualities of Baltasar Gracian which is made from old vines ô viûÝas viejas. This means that the wine comes from grapes grown on vines that are more than a 100 years old! Vines start producing grapes when they are about 3-4 years old but as they get older they produce fewer and fewer grapes. However, the grapes that they do produce are of a greater concentration and flavour. One of the noticeable flavours is a minerally hint because over the century the vineôs roots have gone so deep into the earth. Invariably, wine produced from old vines has a noticeable character and depth that adds to the quality of the wine. Itôs like drinking liquid history!

Baltasar Gracian has been aged for 10 months in oak barrels which is longer than the usual 6 months for most crianzas. Some wines are aged in oak (crianza) and some are not (joven) It depends on the suitability of the grape for aging and whether it will benefit from contact with wood. For example, many Spanish white wines are made to be drunk young and fresh and so are not put in wood. On the other hand, many red wines are put into oak barrels because the wood has an affinity with wine and imparts certain flavours into the wine as well as allowing the wine to breathe while it matures. The extra few months that Baltasar Gracian has spent in contact with the wood helps the maturity of the old vines.

The grapes and the oak produce a wine that has a lovely deep cherry colour with rich fruit aromas, mineral hints and a full taste in the mouth which is ôflattering yet savoury with a neat, dry finishô to quote Jancis Robinson. It is delicious to drink by itself or to accompany red meat dishes with light sauces. Once tasted, it is easy to see why Baltasar Gracian Garnacha ViûÝas Viejas is so highly regarded by the critics and so extremely popular with the public. 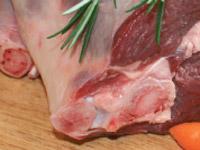 Spring Lamb
Early March is the best time to buy spring lamb why not try our recipe and this monthôs recommended wine, for a perfect meal for two or a special dinner party?
Lovely Bubbly!