This month The Prickly Pair looks back over the last year and forward to the next one.

We have had a fantastic response to last months article; it seems some of our more vibrant readers found some of the party etiquette tips a source of great comfort, over what can after all, be a difficult time of year. So, as a kind of follow on, this month we are looking at New Years Resolutions in an attempt to save some of you from making any rash and unnecessary promises.

Yes, its that time of year again; the quality street tin is down to its last coffee cream, youve memorized every answer in the trivial pursuits game and the only drink left in the house is a bottle of Safeway port.
The 1st of January is the day when all over the Christian world people with massive hangovers and even more massive feelings of guilt, make ludicrous lists of things they are going to give up. Now you can call me cynical, but how many of those spur of the moment, good intentions make it as far as January 2nd?

I would be the first to admit that in my house the only thing with a well defined bone structure after Christmas is the turkey carcass, but that doesnt fill me with a rash and unnecessary urge to give up my few innocent little pleasures.

So why do people, whom only a couple of days previous, thought it was a fantastic idea to eat their own bodyweight in chocolate and drink like a George Best/Oliver Reed reunion, suddenly develop a sanctimonious desire to embrace clean living? Now, we all know that Saturday/Sunday morning Oh my God! How much did I drink? Never again! feeling, infact it is possible to feel that way a full 52 times a year. But only after the night of the biggest p**s up of the Gregorian calendar, do people actually mean it (well at least for a full 24 hours, they mean it).

Another group, desperate to go trotting along the path of righteousness are fat people. January the 1st should be made St Lettuce day, because its the day when all manner of previously happy gluttons, take up grazing, in the misguided belief that six months of eating hippy food, will wipe out a lifetime of worship at the temple of Mc Donalds.

Sex is something else that receives the New Year cold shoulder, although this is probably the shortest lived resolution of the lot; I will never be convinced that anybody, whos entire belief system revolves entirely around sleeping with as many different people as is humanly possible, will just give up their hobby, because of some weird, outdated, post p**s-up guilt trip.

Infact, if I have a new years resolutions to make myself, it is to have more sex next year (I have in fact already run this one by my new partner and it would appear to have the thumbs up) just thought I would share that one with you.

We live in a world that is becoming increasingly PC and as a consequence increasingly boring! I am too young to have joined in the good bits back in the 60s but I am sure that I would have done and I do strongly believe that the reintroduction of copious guilt free sex, in a consequence free environment would certainly perk things up a bit!

Smoking is probably number one on the I must stop list; now smoking is undeniable bad for you and I wouldnt disagree with anybody wishing to give it up, what I do disagree with however , is the timing. Waking up on January the 1st feeling like s**t, is no time to suddenly give up a whole host of little habits all in one go. You stand a far greater chance of success by doing these things slowly and without some non smoking, clean living, and sanctimonious git preaching away on St Hangovers Day.

Getting more exercise now this is a phrase you will hear, at some point early on, during practically every New Years Eve party in the universe. The way to treat this one is with the contempt it deserves; this much hackneyed piece of nonsense, will usually be bandied about by the person least likely to get more, or indeed any exercise at all in the whole room. The people advocating more exercise are also the same people doing the giving up sex thing, so I will leave you to try and work that one out for yourselves. Exercise and especially the kind to be found at gymnasiums, is the work of the devil and should be avoided at all costs; instead there are people out there who not only volunteer to put their selves through self inflicted purgatory, but actually seem to enjoy it! Still it takes all sorts to make a world as they say and who am I to pass judgement on a bunch of masochists.

For myself, the last year has been a bit of a b**tard at times, but managed to end on a high and not being one to wallow for too long in the mire of despair I find myself looking forward to the new year with a feeling of optimism; so let me leave you with a few valuable tips, picked up by myself along the way, firstly, dont give up anything that you enjoy and feels right for you, regardless of outside pressure.
Always keep in mind that life is the real thing (you dont get a trial run) and finally, if you find during the course of the year someone special, remember that the odds of doing that are always stacked against you, so count yourself lucky and treat that person accordingly. 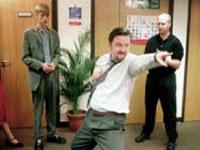 Humbug anybody?
This month the Prickly Pair get full of Christmas Spirit.
Dear Prickly Pair

Don't give up your day job!

Ain't you got homes to go to?