With flavours that range from bland to salty, these plump mineral rich Â“BivalvesÂ” are a gourmetÂ’s delight.

With modern refrigeration and shipping techniques itÂ’s no longer true that you can only enjoy Oysters when there is an R in the month, although they do tend to be at their best during late autumn and winter. After the rich foods eaten over Christmas, these light and flavourful shellfish provide the perfect antidote to heavy meals.  Oysters should only be purchased live and should smell briny and clean. The shells should be tight shut or close when tapped, donÂ’t buy oysters with open shells.

It is important to keep oysters alive until you are ready to cook them; this is best achieved by keeping them in the fridge covered by a wet kitchen towel, donÂ’t store in airtight containers, as this depletes the oxygen supply in the water and will suffocate the oysters, the same goes for submerging them in fresh water.
The trick to keeping oysters alive and in the best possible condition for cooking, is to keep them truly cold, if possible between 32 F-35F.

The beneficial nutritional content of oysters is beyond doubt, containing high proteins, carbohydrates and lipids, it is suggested by the National Heart and Lung institute that oysters are an ideal food for inclusion in low cholesterol diets.

The vitamins found in oysters are B1 (Thiamine) B2 (Riboflavin) B3 (Niacin) vitamin C (Absorbic acid) and vitamin D (Calciferol) oysters are also rich in minerals, including Copper, Iron, Iodine, Magnesium, Calcium and Zinc.

Pearls are sometimes found in oysters, these form when a grain of sand or other irritating substance, become trapped between the oysters mantle and the shell. The oyster secretes Nacre, this shiny substance coats the grain of sand to act as a balm against the irritation and over the years the iridescent Nacre forms a pearl.

Â“ShuckingÂ” or opening the oyster, is easier if you have the right tools; an oyster knife has a very short strong blade and a guard to protect the fingers (it is not uncommon for a knife to slip whilst applying pressure to the shell) to Â“ShuckÂ” the oyster, place it on top of a folded cloth or hold in a gloved hand, with the deeper shell downwards.

Hold firmly as you insert the knife between the two halves of the shell and twist the knife to pry the two halves apart. Work the blade around to the hinge, holding over a bowl to catch the juices, cut the muscle that holds the shell together then remove the top half and slip the knife under the oyster to free it.
Raw oysters have always been linked to love. When Aphrodite, the Greek goddess of love sprang forth from an oyster shell and promptly gave birth to Eros, the word Â“AphrodisiacÂ” was born and the dashing lover Casanova used to start a meal by consuming at least a dozen.

For many however, the thought of raw oysters is unappealing, it is good to know therefore that oysters can be cooked in a variety of ways.

Steamed, fried, baked, stewed, smoked or sautĂ©ed oysters cook wonderfully and this month we have a recipe for a delicious oyster dish for you to try, so why not buy a bottle of your favourite wine, some candles and plan a romantic meal for your loved one. 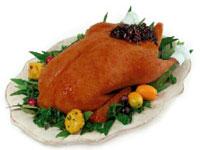 Traditional Christmas Goose
Going back to Neolithic times, goose is one of the oldest domesticated birds and a good choice if you fancy a change from the usual turkey.
A traditional business with a view to the future