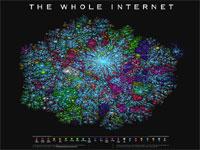 Although initially designed for American military installations, today every country on Earth has connections to the Internet from governments, businesses, schools and homes. Recent research has focused on identifying trends and patterns of Internet useÂ…

For most home users, an Internet connection means using a modem to connect a PC to an Internet Service Provider (ISP).  This is done using a standard telephone line, and recent improvements in telecommunication services allow most people to connect by dialling a local number.  Although slow  modems seldom achieve their theoretical maximum speed of 56k  no further equipment is required.

More advanced technologies, such as ISDN, ADSL and cable modems offer faster connections, but at a higher price.  These require devices that are more expensive than analogue modems, and also the installation of special cabling.  These services are often only available in limited areas, generally in major cities.

Most large companies have permanent connections from their offices, and often employees are able to access the Internet in this way.  Generally, corporates lease a dedicated line from a telecommunications company to link their offices to an ISP.  This is more expensive than a dial-up connection, but allows many simultaneous users to access the Internet and is always available.

As most home users access the Internet via standard telephone lines, data pertaining to usage patterns is widely available.  In the United Kingdom, almost 20% of local call minutes are used to access the Internet1. Similar figures apply in Portugal, Norway and the Netherlands.  In Sweden, the highest figures are recorded, with 38% of all local traffic due to Internet access2. This is not unusual, as the Scandinavian countries are well advanced in their adoption of the Internet. 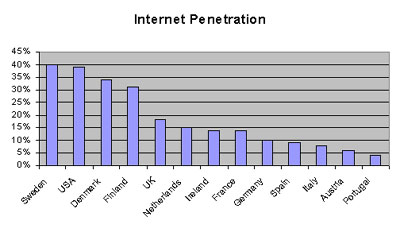 In terms of user numbers, Germany and the United Kingdom lead the way with 16 million and 13 million users respectively.  France and Italy both have 5-6 million with the other European countries having less than 3 million3. These figures do not, however, reveal the true picture!

As a percentage of the population, Sweden has the greatest penetration with 40%, greater even than the United States!  Denmark and Finland also have impressive figures, each with over 30% penetration.  The United Kingdom, Ireland, the Netherlands, France, Germany and Spain all have between 9% and 18% penetration4.  Again, the Scandinavian countries are well represented with high levels of penetration. 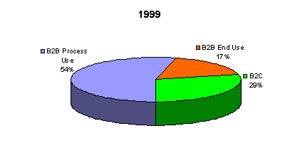 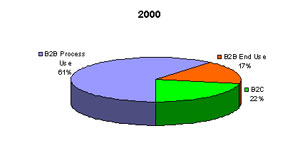 Future Directions
There is no doubt that Internet usage will increase over the coming years.  It is estimated that e-commerce revenues will rise from Â€17 billion in 1999 to Â€199 billion in 2002.  The largest area of growth will be in Business-to-Business process systems, rising from 54% to 61% of total revenues.  During the same period, Business-to-Consumer revenues will fall from 29% to 22% of the total5.  In any case, it is clear that the market is growing at an astonishing rate, and this will lead to many new products and services becoming available.

At present, certain services require greater bandwidth than is available to most users. In the coming years, technical advances will address the bandwidth problem, and enable these services. Mobile Internet access is already available in some countries, and technologies such as ADSL, iTV and cable modems will fuel the increase in Internet usage.  As the uptake shows no signs of slowing down, it will not be long before the Internet is accessible from every home in Europe.

- ADSL  Asynchronous Digital Subscriber Loop A high bandwidth network delivered using standard copper telephone wires, becoming available during the course of 2000 in certain major cities.  The available bandwidth varies from 256kbps to 2Mbps.
- Bandwidth A measure of how fast data can be transferred through a given medium.  Modems offer relatively low bandwidth of up to 56kbps.  Corporate networks usually operate at 100Mbps.  High quality video clips require in excess of 200kbps.
- BPS  Bits Per Second Units used to measure bandwidth.  Usually quoted in Â“kbpsÂ”, or thousand bits per second, or in Â“MbpsÂ”, or million bits per second.
- B2B  Business To Business A term used to describe companies offering services to other businesses.
- B2C  Business To Consumer A term used to describe companies offering services to end consumers.
- Cable modem A device used to connect to the Internet using cable TV infrastructure. This can provide over 2Mbps of bandwidth.
- ISDN  Integrated Services Digital Network
A digital telephone system capable of joining many 64kbps lines together to provide high bandwidth connectivity.
- ISP  Internet Service Provider A company that allows customers to connect to the Internet and provides services such as web site hosting and email servers.
- iTV  Interactive Television A new generation of services based around cable and satellite television that allow users to interact with programmes, perform e-commerce transactions, etc.
- Traffic The amount of activity in a network.
- VOD  Video On Demand The ability to request television programmes to be transmitted upon request.