The food reviews are not advertisements. We visit a different restaurant in Andalucia every month, we pay for the meal and we comment and give points as honestly as we can for the benefit of our readers.

The staff
We found the staff friendly, welcoming and willing to please. They seemed to have a certain flair that made you feel comfortable and welcome. Half way through the meal, while talking to the manager, we were pleasantly surprised to discover that the Chef is Matt. Of course we know Matt has worked as a chef in Sotogrande for many years and he is an excellent cook. I suppose he heard we were out there, so he came out to greet us.

Atmosphere
Although the inside is quite elegant and well laid out for the comfort of diners, it was a rather warm evening so we chose to sit on the patio outside. Summer, when most diners prefer to sit outside, creates a different, more casual atmosphere from winter time, which we thought was very pleasant and perfectly correct for the time of year and location. Of course we do know what the restaurant is like in winter and we can say that the feeling one gets is that one is about to be well looked after.

The Menu
It seemed to be right to suggest that the supplies are fresh. The menu offers a rather interesting selection of starters, all looking rather appealing, followed by meat and fish main courses and, to conclude, the desserts followed by a selection of coffees, coffee liqueurs and cocktails. The cuisine can only be described as creative. Salads, broccoli gratin, bread & butter and some other items are offered as additional side orders.

Wine List
We tried the red house wine, which is always a good indication of what one might expect in the way of quality of drinks as well. It was excellent! The actual wine list is not substantial; however it does offer a selection of good Red, White and RosĂ© Spanish wines, perhaps with the exception of the Mateus RosĂ© and the Chablis.  The carte does include MoĂ«t & Chandon, Cordon Rouge and a selection of the Spanish equivalents.

Chicken Liver Parfait
This is served on a syrup of orange with Melba toast to accompany. FBA Â– The pate was well presented on a large platter decorated with the orange syrup which clearly contained bits of orange peel. You would never guess it was chicken liver pate, it was simply excellent. My mouth waters thinking of it.
Team score Â– 10/10

Mixed Sushi Platter
Served with soy sauce and wasabi paste. FBA Â– This consists of boiled rice rolled in a seaweed sheet with salmon in the centre and sliced into small drums. It is a traditional Japanese dish and, although it was well presented on a square, Japanese looking plate, I thought the rice was not quite cooked right.
Team score Â– 6/10

Cocktail of Prawns
Served with Marie Rose sauce. FBA Â– We were expecting the usual prawn cocktail served in the usual glass goblet but we were pleasantly surprised to see the prawns decoratively displayed on a bed of well prepared salad and with real Marie Rose Sauce, not mayonnaise with ketchup mixed. The prawns were undoubtedly very fresh and the whole thing was delicious.
Team score Â– 10/10

Fillet of Argentinian Beef
Served with a trio of langostinos, Bernaise sauce and fried potato chips. FBA Â– It seemed strange to have fillet and prawns on the same dish, as a matter of fact the idea pays off and gives the diner the best of both worlds without much of a clash. The fillet was just as it should be, nice, thick and cooked exactly as ordered, which, with a thick piece of meat, takes some skill. We could not fault it.
Team Score Â– 10/10

Grilled Langostinos
Served on coarse salt with garlic mayonnaise and impeccably presented as all dishes. FBA Â–The first thing that attracted our attention was the size and quantity of King Prawns being served. As far as taste is concerned, it was so good that I canÂ’t wait for the next time. The prawns were fresh and meaty, just as they should be.
Team Score Â– 10/10

Ribeye of Beef
This is also Argentinean beef served with chimichurri sauce and chips. FBA Â– Ideally this should be cooked on a charcoal grill, but we could not smell or taste the typical BBQ flavours, so we assumed it was just grilled. Nevertheless it was excellent and cooked as ordered.
Team Score Â– 8/10

Baby Banoffee Pie
Served in its own terrine, which made it much more presentable. FBA Â– I am not usually fond of Banoffe pie, but I must say this seemed to be rather light and most pleasant to the palate. There was no mistake about the fresh banana taste.
Team Score Â– 10/10

Pyramid of Mini Profiteroles
Served on warm Belgian Chocolate sauce. FBA Â– I am not sure if the terrine of fresh, whipped double cream was part of it or if it was requested as an extra. If you ever order this, make sure you ask for the cream and take a trip to heaven.
Team Score Â– 10/10

Rich Chocolate Mousse
With Baileys foam, served in a tall glass. FBA Â– I assumed that the Baileys was just at the top in the cream, but I could swear that I could taste it all the way to the bottom. Accurately described as rich, the chocolate is unmistakeably present.
Team Score Â– 9/10

SUMMARY
We were in no way disappointed. We got the impression that this restaurant is trying to impress its clients with the quality of the food it serves. The standard and quality was consistent throughout the different dishes we tried. What was even more pleasantly surprising was the size of the bill at the end. We have found it extremely good value for money for the type of locale and quality of food served. Definitely recommended. 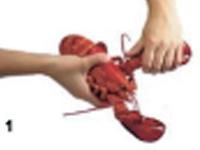 The WXPG Food Review and how to eat lobster
The food reviews are not advertisements. We visit a different restaurant every month, we pay for the meal and we comment and give points as honestly as we can for the benefit of our readers.
The WXPG Food Review: Restaurante Barbesula

The Slow Boat to China - The WXPG Food Review