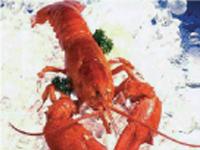 Â“LangostaÂ” or Lobster in English.

Lobster (without butter) is very low in calories, saturated fat, and cholesterol. It has less fat than flounder and about the same amount of cholesterol. Lobster meat also contains omega-3 unsaturated fatty acids

Lobster meat also contains omega-3 unsaturated fatty acids, the substances that seem to reduce hardening of the arteries and decrease the risk of heart disease.

Lobster was and still is considered a luxury food due to the cost of transport that has to be added to bring it to the table fresh in so many far away places. Living in Andalucia means that no such costs are incurred and lobsters are more widely available in restaurants as well as for home cooking.

The fact that puts most people off cooking or even eating lobster is that it must be cooked alive. To many this appears barbaric and inhumane.

At the risk of increasing the demand for lobster overnight, let me inform you that this has been a matter of primary research by the Lobster Institute at the University of Maine.

After numerous experiments and research they have concluded that the nervous system of the lobster is very primitive and that lobsters do not have a brain. Organisms need a complex nervous system to process and feel pain, including a brain.

So letÂ’s get down to business. Lobsters are easy to cook, they may be broiled or grilled, and they are also delicious when just boiled or steamed.

When you buy or handle a lobster, supposedly its claws will be held shut by a rubber band, it is best to leave that on until cooked to avoid getting pinched, alternatively hold the lobster at the end of the carapace where it joins the tail.

Live lobsters can be kept in the refrigerator for about 12 hours, although many will survive up to 24 hours, covered with a damp cloth. Do not store lobsters in fresh water or in plastic bags. If you are carrying a live lobster home from the supermarket, to avoid contact with fresh water, remember to pack any ice in a plastic bag.

Once cooked, lobster will keep in the refrigerator for up to 3 or 4 days.

As I said, lobsters should always be alive before cooking and a cooked lobster should have a tail that is curled, indicating that it was alive when cooked.

It is gratifying to know that no part of the lobster is poisonous; however it is best to remove the sac. The sac is the stomach of the lobster and is located behind the eyes; this is because it can be filled with shell particles, bones from bait, and digestive juices that are not very tasty. Another thing that may be worth removing before eating, is the black vein in the tail, that is just in order to improve the taste.

Basic Lobster Cooking
First calculate that, if lobster is to be served whole, a 1- to 2-pound lobster serves one person. The basic cooking itself could not be simpler:

To Boil Lobster
Use a pot big enough to hold 6 quarts of water and two lobsters at a time. Bring the water to a boil. Drop the lobsters in headfirst and cover the pot. Once the water returns to a boil, cook 10 minutes for the first pound of lobster and 3 minutes for each additional pound. (If the lobsters weigh 1-1/2 pounds each, they will be done in about 12 minutes. Remove the cooked lobsters from the pot and drain before serving. (Base the time on the weight of one lobster, not the total weight).

To Steam Lobster
Place a rack in the bottom of a pot that will hold the lobsters without crowding. Add two inches of water and 1 tablespoon of salt. Cover the pot and bring the water to a boil. Add the lobsters and cover the pot. Weight down the lid so the steam doesnÂ’t escape. Once the water returns to a boil, cook about 14 minutes for 1 pound lobsters, adding 2 minutes per 1/4 pound on lobsters heavier than 1 pound. (Base the time on the weight of one lobster, not the total weight).

Grilled Lobster
For two grilled lobsters, fill a stockpot with enough water cover the lobsters. Bring the water to a boil and plunge the lobsters headfirst into the water. Cover the pot. When the water returns to a boil, cook for 6 minutes. Turn the lobsters on their backs, shell side down. Use a sharp knife to cut through the middle of the soft shell, but donÂ’t cut through the back shell. Pour melted butter and lemon right onto the meat. Crack the claws and pour additional melted butter and lemon on the claw meat. Grill the lobsters over medium-high heat with the shell side down for 8 to 10 minutes. Serve immediately.

Sometimes it is possible to get frozen lobster tails from the supermarkets. These would have been industrially prepared, probably imported from Canada, and they are perfectly acceptable.

To Cook Lobster Tails
Thaw the tails in the refrigerator or in a bowl of cold water. Bring a pot of water to a boil. Add the lobster tails and bring the water back to a boil. Cook 7 minutes for 5-ounce tails, 7-1/2 minutes for 6-ounce, and about 8 minutes if the tails weigh 8 ounces.

Grilled Lobster Tails
Thaw the desired number of lobster tails. Insert a metal skewer into each tail lengthwise to keep it from curling. Drop the tails into a large pot of boiling water and set a timer for exactly 4 minutes. Remove from the water and lay the tails on their backs. Use a sharp knife to cut. 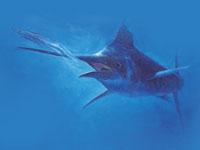 Sword Fish
Have you tried it? Asks Sebastian Polinares. Spain is one of the nations with the highest catch of Sword Fish in the world; this would explain why it is on practically all the restaurant menus in Andalucia and almost always on display at the fishmongers.
Ostrich