It was in 1991 when I first took a trip to Ceuta, the Spanish enclave in North AfricaÂ” says Gordon Bray, Â“It was a warm, sunny day, but on arrival, I was rather shocked with the state of the town.

My first question wasÂ… Â“What time is the next ferry back to Spain?Â”

I have passed through Ceuta several times since and I could see that they were making an effort to clean the place up yet I have never ventured into the town since my first visit.

When I arrived this time, in late April, it was with some trepidation as to what I might find. To my surprise, I could not believe the transformation over the years. What a difference!

The prominent fortress, dominating over the Historical Centre of the City, has had extensive restorations made; now affording stunning panoramic views of the African coast and across the Straits of Gibraltar to Mainland Spain. It has been an impregnable fortress for centuries.

Within the surrounding Royal Walls are the vaults of the formal artillery stores, now fitted out as suites. Since the recently completed restoration, it now houses a modern museum and numerous gardens.

This is one of the most impressive fortresses in the world to see. It is surrounded by sea water, but subways lead to the nice beach below. At night the floodlights give added attraction to the fortress, a spectacle not to be missed.

Historically, it has been in the hands of Arabs, Phoenicians, Romans, Visigoths, Portuguese and Spanish...

The Parador (hotel), built within walls made in the 17th and 18th centuries, is located within the Plaza de Nuestra SeĂ±ora de Africa. This fine hotel offers some luxurious comforts at a reasonable cost for that weekend break. Floral arrangements and attractive fountains are in abundance throughout the city.

A rather large Tourist Office has been placed next to the wall on the town side, this is where you can obtain information as well as guides to assist you. The town itself is just a few minutes stroll away from there, through a first class, pedestrian only shopping area offering duty free goods.

Restaurants are in abundance, offering many unusual dishes. I fancied a traditional tagine cooked Moroccan meal, so I took a taxi to Al Andalus, a Moroccan restaurant on a cliff edge. The short taxi ride just cost Â€3. The meal was excellent, inexpensive and the service was beyond reproach. Other good restaurants include the Refectorio or, close to the port, La Almenara, both Moroccan and both very good.

I discovered that ideally one should engage one of the local guides that greet new arrivals at the port and you will have a trouble free tour of the whole town. Just make sure that the guide is one of the officially appointed ones.  I engaged El Mekadem Ahmed, whom I found very pleasant and helpful, he also arranges into Morocco by taxi or bus to Tetuan and Tangiers, from as little as Â€30 per person and a tour of Cueta by taxi Â€45 with guide (not per person). 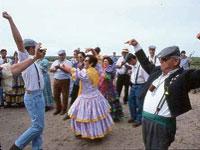 El RocĂ­o
This Spanish folklore event reaches world wide fame, yet it is not often talked about. Says SebastiĂˇn Polinares.
A Visit to Mojacar

A weekend away in the cave village