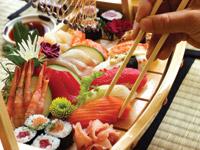 Know the difference between Sushi and Sashimi

Sushi, meaning "seasoned rice," is often confused with sashimi, which means "sliced raw fish". Sushi originated in Japan as a method of preserving fish. Today's sushi comes in many forms and can be eaten with chopsticks or the hands, and usually can be found in three basic forms.
Maki-sushi, the best sushi for beginners, is rolls of sushi usually involving fish, rice, and seaweed. A regular roll has seaweed in the outside. The middle layer is rice, and the innermost layer is fish and/or vegetables.
Nigiri-sushi is the most familiar to sushi-eaters. It consists of a piece of fish resting on top of a block of rice. The fish is usually raw, and sometimes a strip of seaweed is used to hold the fish and rice together.
Gunkan sushi is a little more exotic. It tends to use unusual types of sea life, such as urchins or fish eggs. The seafood is wrapped in seaweed and shaped like a boat, and usually rests on a little pile of rice. It is definitely for the more adventurous and not recommended for beginners.
Sushi rice is short grained, although medium grained is sometimes used. It is often covered with talc, and needs to be rinsed before cooking. Most sushi chefs season the rice with vinegar and sugar after it is cooked.

Novice sushi eaters should sit at the bar, where they can watch the food being prepared by the sushi chef but remember that the handling of chopsticks involves certain rules of etiquette. The chopsticks should never be used for drumming, flipping, or sharing food. If you must pass a piece of sushi from one plate to another, use the opposite ends of the chopsticks that have not touched your mouth. Most Japanese restaurants provide a ceramic holder for your chopsticks. Use it to hold them whenever they aren't in use.
Tea, sake, and beer are considered acceptable beverages when eating sushi. Do not order anything other than sashimi or sushi from your chef. It is considered impolite to do so. You may ask the chef for his recommendations. Remember to order a variety of sushi. Different flavours complement one another, and this gives the chef an opportunity to show off both his fish and his talents.
Sushi bowls are garnished with papery thin slices of ginger. This is used to cleanse the palate between different types of sushi, and should not be used as a condiment. Wasabi (kind of green horse radish), on the other hand, is the sushi condiment. Use wasabi very sparingly until you become accustomed to the taste.
Some people also season their sushi with soy sauce, which is poured into a little ceramic dish. Do not dip the rice side into the sauce, only the fish part and avoid the thing disintegrating, use your hands, it is ok. Try and eat it in one bite, it is considered improper if you don't. Do not, however, pick up the sushi, take a bite, and then place the remainder of the piece back on the plate. 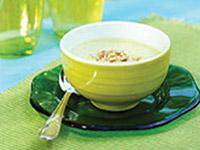 No Need for Flu Vaccine!
Chicken soup is known for its curative powers.
Never Cooked Italian?

Why go to Marbella?