Hat trick victory for europe in the ryder cup 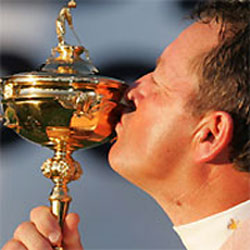 United States captain Tom Lehman said there was no disgrace in losing to a team of Europe's calibre after his side's 18½-9½ Ryder Cup defeat.

"I just don't think there's ever been a European team which has played better," said Lehman. "I tip my hat to them. They played incredibly well, they putted amazingly well and they drove it on the fairway. "They were inspired, the crowd gave them momentum. Our team came ready but maybe we weren't quite ready enough."

Captain Ian Woosnam said Europe's record third straight win in the Ryder Cup vindicated his team selection. Woosnam's captaincy had already been questioned before he gave wildcards to Darren Clarke and Lee Westwood, instead of players higher in the rankings. "I got them right and that's why I'm captain. Not winning with such a strong team was what worried me the most but they played fantastically," he said.

Woosnam dedicated the win to Clarke's wife, who died of cancer six weeks ago. Picking Clarke and Westwood turned out to be an inspired move, with Clarke winning all three of his matches, and Westwood finishing as Europe's joint-top points scorer. Its been very emotional and I just can't say enough about my team," said Woosnam after the 18½-9½ victory.  "I was a bit on edge but as the blue [Europe] started getting more and more on the board I got more confident."

Clarke had a spectacular weekend, from his appearance on the first tee to his part leading the celebrations on the clubhouse balcony on the Sunday night. Woosnam joined in the post-match celebrations, spraying champagne around while team-mates enjoyed some Guinness. Clarke said he was overwhelmed by the support he had received since the loss of his wife Heather - particularly from Woosnam "I have to say again how grateful I am to Ian Woosnam for having given me a place in this wonderful winning team," he told the Daily Telegraph. The support I had from my team-mates and their partners, along with the American players and their other halves, was phenomenal, starting with what happened on the first tee on Friday [where Clarke received a huge cheer from the crowd]."

Woosnam was also quick to pay tribute to the role played by the K Club crowd. "They've really got behind us and it's made a big difference," he enthused. "I knew it was going to be loud here but I didn't think it was going to be as good as this." Luke Donald, who beat Chad Campbell 2&1 to ensure the trophy was retained, said: "Chad beat me quite comprehensively two years ago but it was not about revenge.It was about 14½ points. We won every other round on both days and we wanted to go out there and get as many as we could. "We had so much confidence in the team; we believed they would have to do something spectacular to win. We've had 12 great players playing all week."