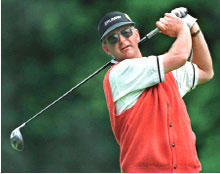 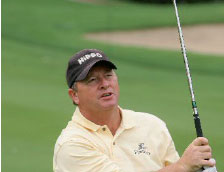 Ian Woosnam brought half of his European team to the K Club on Th ursday to practise at the Ryder Cup course. Spains Jose Maria Olazabal said the unpublicised get-together was vital to boosting European hopes of defending their title against the USA in Ireland. Olazabal said: We want to see how its playing and Woosie will pinpoint his ideas and well see what he has to say. Its important to get together well before the tournament and have a taste of the course and the team atmosphere. Olazabal was joined at the practice session by Paul Casey, Darren Clarke, Luke Donald, Padraig Harrington and David Howell. Th e rest of Woosnams team are either in action or resting. Th e European reconnaissance mission follows a similar trip made by all 12 of the American team and captain Tom Lehman last week. Olazabal was impressed with the recent changes made to the Arnold Palmer-designed course and wary of the challenge ahead. Th ere are a lot of new trees and you really need to play good golf around here now, he said. Th e 40-year-old Spaniard, who will be playing in his seventh Ryder Cup, added they would also be having a couple of beers and taking in Woosnams views on the coming match, which starts on 22 September. European captain Woosnam is sure to refl ect on Th omas Bjorns criticism of his captaincy - criticism he is confi dent will make the team stronger. Bjorn labelled Welshman barmy after he was overlooked for one of the two wildcards, which instead went to Clarke and Lee Westwood. It will make Lee and Darren more determined, said Woosnam. Once we get to the Ryder Cup it will be put to bed.

Last Month's correct answer was: The match stands as played. The players failed to take note of the conditions of the competition and have only themselves to blame.