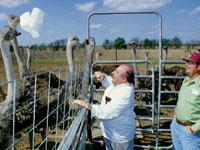 Well, if you are so hungry that you could eat an ox, what could you eat when you prefer chicken? An ostrich, of course! Says Sebastian Polinares.

Ostrich meat is now quite readily available at your local super market. You must have seen it; it is referred to as the alternative red meat because the colour and texture look very similar to beef.  One thing is certain, eating ostrich, you would be safe from mad cow disease.

Ostriches were first used commercially in South Africa in the mid 19th century, when the feathers were used in fashion and costuming as well as in feather dusters. Victim of  World War I, after the feather market crash in 1914, ostriches became a viable commodity for their leather and meat untill after World War II, when feathers came into demand again.

Because of the fright over Mad Cow Disease ostrich meat has attained an increasing level of acceptance in France, Italy, Switzerland and Belgium. There is a lot of ostrich meat about these days and it is clear that someone is trying to sell it to us.

Although the meat looks just like beef, it is very lean. It is lower in calories and cholesterol and higher in iron than any other red meat. The absence of fat also means that it is lower in fat, cholesterol and calories than beef, pork, chicken and turkey and although this gives it a different texture to beef after cooking, it is very juicy and tender when cooked properly.

Research determined that ostrich muscles are tender or medium tender. Cuts rated tender should be grilled, broiled, fried or pan-fried. Medium tender cuts should be cooked in a sauce or braised. And, all cuts can be roasted, cured or cooked as kebab or stir fried.

Because of its low fat content, ostrich cooks faster than other meat products. Steaks and whole muscles should be cooked medium rare to medium (140°-160°). Cooking ostrich to well done is not recommended.
There used to be an ostrich farm right here on the Costa, on the N-340, just on the La Linea turn off, some of the veteran residents may well remember it. I believe it was closed down because it was being used as a scam for pyramid selling.

Ostriches can be raised successfully in many climates and conditions, however the birds are making a big difference for countries like China where land is limited, but the need for food is high. The birds are able to utilize wasteland better than any other meat animal. They eat grass and roughage and dont compete for human food.

Ostriches are raised on small farms and on large ranches. Eggs are incubated and hatched. During the grow-out phase the birds may be kept in large paddocks. Breeders are kept in pairs, trios or colonies.

The ostrich association says neither the U.S. Department of Agriculture nor the Census Bureau tracks the ostrich population as they do other species of livestock, but based on a survey of its membership, the association estimates there are between 350,000 and 500,000 ostriches of all ages in the United States alone.

Some facts about ostriches: 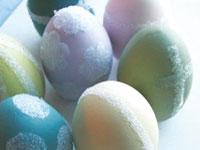 Traditional Easter
Easter is probably the most religious celebration you will ever see in Spain. The Semana Santa commemorates and depicts the whole event of the crucifixion of Christ to the rejoicing for his Resurrection on Easter Sunday, which also marks the end of Lent
Crab Meat