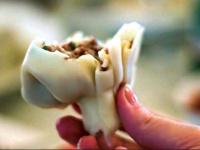 You must try Khinkali at Tbilisi

A traditional tasty & juicy dumpling from the Georgian cuisine in Marbella

On arrival in Tbilisi, border agents don’t just stamp your passport; they hand you a bottle of wine. It’s a fitting welcome to Georgia where dinner guests are exalted as “gifts from God” and traditional feasts called supras unfold in biblical proportions, sometimes lasting for days on end.

Fusion cuisine is most certainly not a novelty in Georgia, it is traditional. It’s hard to find dishes anywhere that so deftly intermingle Eastern and Western worlds. The similarities aren’t coincidental; sitting at the midpoint of ancient East–West trade routes, Georgians could cherry-pick the best of what the Greeks, Mongols, Turks, and Arabs were cooking along the Silk Road.

Variables aside, there are certain dishes you shouldn’t leave Georgia (or a Georgian restaurant) without tasting. These are the nonnegotiable—  the unforgettable bites that keep Georgia on your mind.

Khinkali is eaten plain, or with ground black pepper. They are dumplings filled with meat and juices trapped inside. Broth is often added to the meat to make the Kinkali juicier.

The top, where the pleats meet, is tough, and is not supposed to be eaten, so that those eating can count how many they have consumed. There is a widespread etiquette to use one’s bare hands, the using of a fork and knife is not considered polite.

Bigger & better Kokomo
If you thought that Cocomo Restaurant closed for their usual annual break you could not be more mistaken! Now its a bigger and better Kokomo!
Do you still believe Tripadvisors clients opinions?

Not just your average curry...

Trip Advisor is a disgrace