It has been a busy time at Mayfair International Academy with the different events. 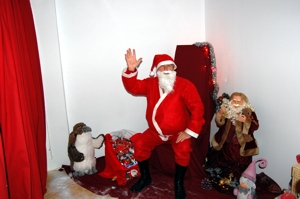 It seems like we are just getting over Halloween and already Christmas is just around the corner.  It has been a busy time at Mayfair International Academy.  The first half of the Autumn Term ended with a wonderful Halloween party in the afternoon for the Primary pupils.  The costumes were, possibly, the best yet and they ranged from terrifying axe-men to beautiful princesses.  As the weather co-operated with wall to wall sunshine, the party was held in the playground with lots of fun and games and, afterwards, swimming awards and certificates were presented to the pupils who had achieved them.

The Secondary students had a Halloween disco in the evening and the internet café was turned into a dungeon complete with cobwebs, bats, spiders and hideous faces peering down from the walls.  The students danced to music provided by Dave, the DJ, from The Beat radio station.  The Sixth Formers had organised treasure hunts, around the darkened grounds, with ghouls and demons lurking in the shadows ready to leap out on any unsuspecting student.  There was a lot of screaming and shrieking and hysterical laughter meaning that everyone was having fun.

After the half term break, the Secondary students enjoyed a trip to the WW11 tunnels in Gibraltar. Students at Mayfair have enjoyed this trip since 1999 when very few people were even aware that entry to these tunnels was possible. In the beginning, students could investigate the enormous generators from up close and even climb to the top for a better view.  Unfortunately, they can only be viewed from afar now but they are still interesting to see. 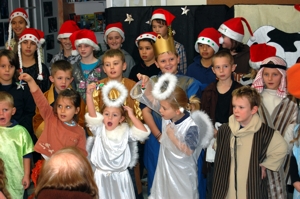 There have also been a few improvements over the years, for safety, but having to stumble around in the dark and find your way by flashlight over the rubble certainly made the trip more exciting.

Next event was the Christmas Fair, which was a big success, with a beautifully decorated Santas grotto, raffles, tombola, lucky dip, Teacher in the Stocks, Trap the Rat, and stalls selling everything from childrens books to pottery.  It was a cold day but there was delicious mulled wine, alongside the tea, coffee, mince pies and Christmas cake in The Food Court.

In the final events of the year, Mayfair Primary children showed off their acting skills and talent as they entertained their parents in the Christmas concert with a Nativity Play and songs and carols in English and Spanish.  The Secondary students, meanwhile, are busy preparing for the annual Mud Run, which takes place on the last day of the Autumn Term.   This test of endurance has become very popular, over the years, and is definitely not for the faint-hearted.  In the past, students who completed were entitled to wear a gold star on the sleeve of their polo shirt but this year, they will be awarded a medal for finishing.

And so, we reach the end of the first term of the year, which has simply flown by, and we would like to take this opportunity to thank our wonderful team of Primary and Secondary teaching staff and also all the parents who have helped with above events.  We would also like to wish a Happy Holiday to all our students and we look forward to seeing you in 2009. 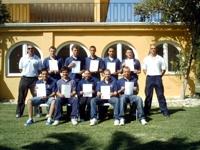