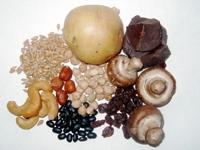 Some foods can kill

Although poisonous foods are fairly rare, they can have dangerous, and even deadly, consequences. Don't write off fish and corn for life; just beware of their origin and their freshness. And when in doubt, just throw it out.

Fruit seeds (Cyanide)
The American Medical Association (AMA)'s Handbook of Poisonous and Injurious Plants states that eating a large quantity of apple seeds (and other seeds) can be fatal due to the presence of the toxin cyanogenic glycoside, or cyanide.

The exact lethal dose is unknown, although swallowing the seeds of a single apple is generally harmless for an adult. Children are more vulnerable, 15 apricot kernels are sufficient to kill them.

The symptoms are excessive sweating, abdominal pain, vomiting, and lethargy and in severe cases, convulsions, incontinence, coma, and even death.

Pufferfish (Tetrodotoxin)
Fish that are members of the Tetraodontiformes order, particularly pufferfish, Although not commonly consumed by humans, toadfish, parrotfish, angelfish, and xanthid crabs can cause the same type of poisoning. The flesh of pufferfish may not be dangerous, but the liver, intestines, skin, and gonads can cause a more violent poisoning than any other marine species. This is due to the high levels of the poison tetrodotoxin contained in these organs.

Pufferfish poisoning can cause paresthesia (a numbing, burning, tingling, or crawling sensation on the skin), paralysis, convulsions and death within 4 to 6 hours.

Mushrooms & fungi (Mycotoxins)
Different types of poisonous mushrooms can cause a variety of symptoms including hallucinations, profuse sweating, vomiting, abdominal cramping, convulsions, coma, and even death. Mycotoxins produced by moulds on many types of cereals, nuts and grains such as corn, peanuts, barley, wheat, oats, and beans can also cause a wide range of afflictions, including esophageal and liver cancer, loss of appetite, diarrhoea, inhibition of the immune system, and death. Never eat wild mushrooms you aren't absolutely certain are safe. Buy grains and nuts from a reliable source, store them in a cool, dry place, and don't keep them for more than a few months.

Histamines (Scombrotoxin)
Histamine is formed by the growth of certain bacteria and their interactions with amino acids in food, which can occur during the spoilage of foods like fish or the production of foods such as Swiss cheese.

The symptoms are Tingling or burning feeling in the mouth, drop in blood pressure, appearance of a rash on the upper body, itching, headache as well as possible nausea, vomiting, and diarrhoea.

There is not much you can do to avoid it besides steering clear of the most common culprits, namely tuna, mahi mahi (dolphin fish), sardines, mackerel, and Swiss cheese.

Marine finfish (Ciguatera)
Found in subtropical and tropical marine finfish, such as barracudas, groupers, mackerel, snappers, jacks, triggerfish, and many other species of warm-water fishes.

Not all these fish are poisonous, but those who have consumed naturally-occurring toxins found in many dinoflagellate (algae) species can cause what is known as ciguatera (pronounced see-gua-terra) fish poisoning. Not usually lethal but only buy these types of fish from reliable sources. 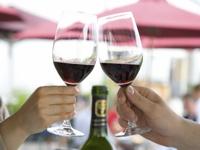 Grape or Wine Harvest?
This is a time of year that some of us look forward to. It is when holidaymakers start freeing some parking spaces and children give us a bit of a breather as they go back to school.
Healthy Cooking for Summer

Bring in the Spices