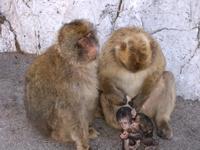 One of the better-known attractions in Gibraltar is the family of semi wild apes that live there; the Barbary Macaques  of Gibraltar are the only wild primates in Europe. 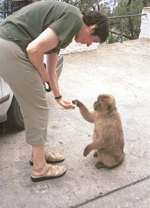 At present there are approximately 200 individuals representing several extended families or packs scattered among the higher reaches of the "Rock", mainly near the Upper Siege tunnels and at the "Apes Den" near the cable car station. The population has fluctuated considerably over the last 200 years. In 1893 it may have been about 130 animals and this figure declined to a low of just 3 during the early 1940's, mainly due to an outbreak of gastro-enteritis. Winston Churchill subsequently ordered that the colony of apes should be maintained at all costs on the rock in order to comply with the traditional belief that this was necessary for the territory to remain in British hands. A large but unknown number of additional animals were then imported from North Africa between 1942 and 1946. It is assumed that all the present animals on the Rock are descended from the last series of importations.

The apes are the most privileged residents of Gibraltar, their care was originally the responsibility of the British Army, but now this rests with the local Government. Proof of their preferential treatment is that if an ape becomes ill it is treated at the local military hospital. Citizens of Gibraltar, military aside, are not usually allowed this privilege.

The animals receive a daily supply of fresh water and vegetables, fruit and seeds as supplement to natural food resources (leaves, olives, roots, seeds and flowers), their individual health is checked on a regular basis, additionally, body size, weight and several other measures are taken. Finally, the animals are given a tattoo number and a microchip as a means of identification.

In an ongoing project conducted by the University of Zurich, the German Primate Centre, GONHS and GVC all apes older than 3 years have been photographed and the pictures together with individual characteristics catalogued.

- One hypothesis postulates that, at least as early as the Moorish occupation of southern Spain (711-1492 AD), apes were exported from North Africa to Gibraltar. Spanish histories from the 17th century mention apes on the Rock of Gibraltar. When the British took over the Rock in 1704, they found apes living in a more or less wild condition.

- The other that the Barbary macaques of Gibraltar represent the remnant native European population. This is unconfirmed, although some authors claim that macaques may still have been living in Spain as late as the 1800's. What is certain is that the species, or its immediate ancestor, did live in Spain and other parts of Europe (including England) during the Ice Ages.

The greater mystery is where do they disappear to when they die? No one has ever found the remains of any of the colony's deceased apes, they just seem to know when it is their time and disappear into the wilds of the mountain to some undiscovered location.
On occasions apes will stroll down the mountain and into the streets where they make a nuisance of themselves breaking windshield wipers off cars and other acts of petty vandalism.

On the whole however they will stay on the higher grounds of the Rock where they can be seen. Apart from the candy stealing, the apes are used to humans and tolerate the daily procession of tourists who come and watch them play. They will allow you to get close and feed them and even pose for pictures. Some of the older ones will even ham it up for the cameras as long as you treat them. Although they are wild animals, there are only two things to be careful of, as the tour guides point out.

It is advisable to join a guided tour as opposed to venturing on your own because whatever the ape sees and likes it will want it. They can forcefully grab anything from your hands (jewellery, cameras, etc.) or even from of your pockets. Be warned, you will not get it back!
Careful if approaching young baby apes, because the protective mother will definitely not like it and her motherly instinct may not agree with you.

Introduction to Andalucia
Its varied landscapes, the benignancy of its climate and the friendly character of its population have turned it into one of the most attractive regions in Europe.
Historical Summary of Andalucia