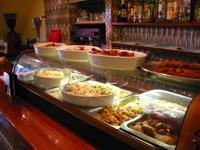 Tapa, the snack the accompanies your drink before lunch without spoling your appetite, however you can easily make a meal of them.

It is the town of Seville that is best known for its "Tapas". It is a local custom in the whole region to go for a "Tapa" when its time for a beer with your friends just before lunch or dinner. Of course tapas are widespread throughout Spain, it is just that in Seville it has evolved into a cultural ritual. In other more distant parts of Spain, it may even assume different names such as "Poteo" in the Basque Country (colder weather means wine and wine used to be drank from "potes") or "Alifara" in the regions of AragĂłn and Navarra. Tapas consist of miniature size portions presenting an array of different dishes, normally displayed in most bars. Tapas can be hot or cold, they can be simple or the result of elaborate recipes, fried, boiled or baked. The choice of recipes is interminable each carrying its own name to describe it. Anyone inventing or discovering a new flavour, would give it its appropriate name.

There are various theories as to the origin of this custom. "Tapa" literally means "lid", meaning a lid placed by the barman on top of the glass of beer or wine. The lid traditionally being a slice of ham or cheese placed over the rim of the glass and it is thought that the purpose was to stop flies or other insects falling into the drink. 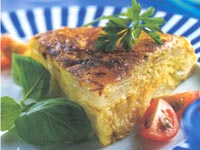 It is also said that the "tapa" first appeared, because of the need of farmers and workers to take a small amount of food during working hours to sustain them until the time of the main meal. The main meal, being very fatty, tired the organism during digestion to the extent that a "siesta" had to be taken for a couple of hours before going back to the fields or the workshop, so that the longer the morning working hours could be the less one had to do after the meal. The snack required wine, because alcohol enhanced the enthusiasm and the strength of workers, and in winter it also warmed them up.

Some authors assure us that the "tapa" was born when, due to an illness, the Spanish King Alfonso X, known as the "Wise", was prescribed to take small amounts of food with some wine between meals. Once recovered from his ailment, the "Wise King" ordered that all the inns in the land of Castile must not serve wine unless it was with something to eat. This Royal Decree was readily welcomed as it slowed the effect of inebriation and at the same time, those who could not afford a full meal, at least did get some nourishment too.

Although the tapas list may seem interminable, the most common and original are the slice of ham or cheese or cooked pork. However, nothing is excluded, olives, Russian salad, anchovies, fried peppers, octopus, shrimps, and anything one can think of counts. Anything goes and all prepared in different ways with the object to tease the palate.

This is probably the best way to discover what the Andalusian cuisine is all about and it is fun as well as inexpensive. One can easily make a meal of it ordering an assortment of tapas over a few glasses of beer or wine. Tapas have become very popular and the concept adopted very successfully by restaurants in most other countries including the U.K., the U.S.A. and even Japan. 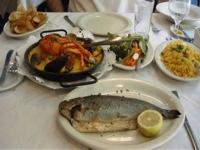 Andalucian Cuisine
The Mediterranean and the Atlantic are sources of sea foods; the extensive farming land provide fresh meat and vegetables; the mountains, forests, rivers and lakes are the perfect environment for wild game, sweet water fish and wild flora.
Bring in the Spices

Bring in the Herbs