Aloha Golf Club, Nueva Andalucia Ā– Current Opening Hours: Every Day from 9 am to 22.00 - for reservations

The food reviews are not advertisements. We pay for the meal and we comment and give points as honestly as we can for the benefit of readers. The points relate to quality and price according to the standard of the restaurant. We try to visit only restaurants which we believe are worth reporting on.

Introduction
The Aloha Golf Club is well known for hosting many royal personalities in its time and it is one of the first courses to be established on the Costa. Their restaurant is open to the public, so we decided to try it.

The Staff
We found the waiters very professional and obliging. ItĀ’s what you would expect of a better class restaurant. We were attentively and courteously served.

Atmosphere
This is an upmarket restaurant living on the history and reputation of the Golf Club, it follows that the atmosphere is formal. Jeans and Ā“TĀ” shirts are not allowed, though a tie and jacket is not strictly required.

The Menu
The menu was not very extensive, but then I do know that this usually an indication that the products are provided fresh. All the same it is quite comprehensive with a good selection of starters, meat and fish as well as selection of typical Spanish Rice, which blends with the rest of the menu.

Starters
As we only wanted to try, we skipped the starters and moved on to the main course.

Sirloin with Green pepper Sauce
This was quite delicately presented on the dish with a portion of rice shaped into a mould. FBA Ā– The meat was cooked exactly right, as we asked, and the sauce formed a perfect bland between the meat and the rice. It was quite tasty.
Team Score Ā– 9/10

Tiramisu with BaileyĀ’s Ice Cream
An individually made portion of TiramisĆŗ alongside some BaileyĀ’s Ice Cream and some whipped cream for decoration. FBA Ā– This was quite delicious, the combination of ice-cream with tiramisu was well thought out, although the TiramisĆŗ (pick me up) does itself normally contain Marsala (or other liqueur) that can be clearly tasted within its fibre.
Team Score Ā– 8/10

Summary
A high standard restaurant, within a most reputable golf club, where one can rub shoulders with some well known people. The quality and preparation of the food is very good and the price is quite good too if you take into consideration the above two factors as well as the level of service that has to go with it. 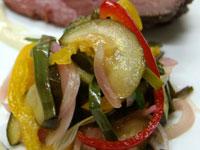 The Web Express Food Review Ā– General Review
Due to the Semana Santa, which sees in the beginning of the new summer season, it is not a good time to go round exploring restaurants.
The WXPG food review Ā– El Estribo - Sabinillas

A review of the restaurants reviews