As the ultimate dressing up accessory; stockings have stood the test of time

According to Edmund Howes in his publication Â“The Annuals or General Chronicles of EnglandÂ”, 1615, Queen Elizabeth I was presented with her first pair of black knit silk stockings by her silk woman, Mistress Montague in 1560. These were given as a gift to her majesty for the New Year. Apparently the Queen loved them and refused to wear cloth stockings again, declaring "Henceforth I will wear no more cloth stockings."

By as early as the end of the 18th century stockings were hand finished with seams at the back and although these early examples of silk stockings were unisex and bore little resemblance to the stockings of today, nevertheless precedence was set. In 1879 ladies stockings took on a new appearance and were worn finely striped in peacock blue and golden yellow.

White silk was still essential for evening dress but pink was increasingly worn for less formal social occasions. The pink gave ladies legs the appearance of a blush through the thin classic styled dresses. At this time, female attire began to highlight the leg and a fashionable stocking became the main focus of attention especially during social dances.

Skirt hems rose in the 1900s and soft transparent and durable stockings became vogue. Poor girls wore their stockings to the knee and tied them in a knot, whereas affluent young ladies wore short silk chemises and silk drawers worn over stockings that stretched to the knee or corsets with suspenders (known as a Basque).

By 1926 girls were photographed alighting from cars showing their legs above their stockings. Stockings took on an erotic overtone until the thirties when the suspender belt came back into fashion and the garter disappeared. Marlene Dietrich wore stockings in the Blue Angel to play the temptress attempting to manipulate men's fantasies. They also feature in The Edwardians (1930) (Vita Sackville-West) as part of women's power dressing. It was in 1940 that stockings finally had their finest hour, with the invention of Nylon. It was a short lived pleasure however, because during the war nylon production was turned over to the manufacturer of parachutes, tents and ropes.

By the end of the war nylon production was reinstated and in 1945 Macy's Store in New York sold their entire stock of 50,000 pairs of stockings within six hours. At the same time 40,000 women waited all night in the rain, outside a Pittsburgh store just to buy nylons. Tights may have come along as an easy alternative to stockings, but for some (especially men) the allure of stockings never went away and will always have a special place either in or out of the bedroom! 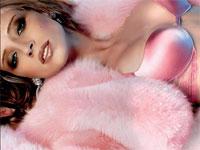 Foxy!
Fur has made a big come back in recent years, but for some the right to wear fur was never in question
Dare to bare?