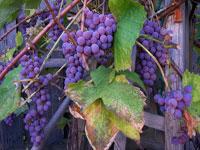 As well as providing fruit and shade they also look good, what could be cooler then a Grape Vine?

Long before the Romans took an interest in them, Grape Vines have been growing naturally in woods for thousands of years. They climb trees in search of sunlight to ripen the fruit they produce and these wild vines are still to be found in abundance in areas of natural woodland throughout mainland Europe.

It wouldnt be fair to attribute the cultivation of the modern commercial Vine to the Romans alone, as Grapes have been used for producing beverages both alcoholic and non alcoholic since possibly before the ancient Egyptians, who are also known to have produced a wine using Grapes.

Growing a Grape Vine at home is not as difficult as you might expect (especially in Spain!) the key is to spend some time on soil preparation before planting. Dig down as far as you can get and incorporate some well rotted manure, (make sure the manure is well rotted as fresh manure will burn the vine roots) most vines are supplied in pots and the same rules for planting apply as to other pot grown plants.

When buying a vine to plant on look for one that has not been grown in a small pot for too long making the roots spiral in the base. When planting on, the planting depth should be just below the original compost surface in the pot so the root ball is just covered with soil.

Ideally the roots should be kept cool and the head grow into the sun or towards a sunny spot on a wall or fence. To keep the roots cool you can place large rocks or stones around the base to protect from direct sunlight. In the first two years you should concentrate on producing a framework. This involves training the side branches and tying them to wires or trellis supports. By training the side branches horizontally you will be encouraging fruit production later on.

Feeding the vine with a liquid feed once a month during the summer for the first two years will also help with fruit production at a later date. The vine will produce fruit during the first two years; this fruit is best left on the vine, but thinned by removing 2/3 rds within each bunch of the grapes that have formed. Finally in the third year, you can plan to produce some useable fruit. At the start of the year mulch with some well rotted manure around the base, you will no longer need to feed with liquid feed during the summer. The grapes will form on the fruiting spurs and these should be thinned in each bunch by 1/3 rd.

The grapes will develop over the summer and in late July you should remove some of the vines foliage around the grapes to allow more sunlight to get to them and aid ripening. Tie in the new shoots at the end of the year cutting them back by 25% this will encourage the formation of new fruiting spurs the following year.

Tar washing with Jeyes Fluid in the winter has the advantage of killing all the pests that are over-wintering in the stems and buds; do this by mixing one part Jeyes Fluid to thirty parts water and spraying the vine until it runs off, soaking the stems and branches. With a little forethought and the proper maintenance from the start, growing your own Vine will reward you with a good supply of fruit, a cool haven of shade and years of pleasure. 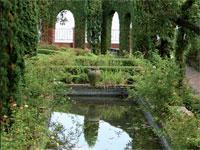 Surviving summer heat in the garden