Europa Health Care Clinic runs a course to help you give up smoking.

Many persons managed to stop smoking just using their mental power. Others did it with chewing gum, nicotine patches, intelligent books or do it yourself programmes. Other methods which could have helped are acupuncture, bio resonance and Bach-Flowers.

A permanent objective of science, the newest studies from England, Japan and Canada confirm that humans possess a gene which is responsible for the catabolism of nicotine. Its named CYP2A6 and causes in each person a different way to eliminate nicotine. A person whose nicotine levels decrease quickly has to grip a cigarette more often than a person who metabolises the nicotine slowly. Science is intending to influence this gene and its enzymatic processes. Actually, a substance against psoriasis is under observation.
We know of just only a few reasons, why one person is more successful than another at quitting.

Many people are frightened of hypnosis, believing that their free will can be taken; this is easily understood considering that in some shows on stage, people are ridiculed.

But a method, developed by Prof. Erikson and others, gives the possibility, with help from the therapist, in a very relaxed phase, called trance, to come nearer to the persons subconscious and to work with it. This is the psychotherapeutic concept, helping the patient to stop smoking.

After two intensive sessions, getting information about all relevant psychological data and an extensive anamnesis about the smoking behaviour, the patient is taken into a hypnotic state. The subconscious will activate a process to stop smoking and to switch over the organism to non smoking, with the effect that the gene CYP2A6 changes the enzymatic processes of nicotines catabolism, avoiding by this way a lack of nicotine.

There are patients who have tried to stop smoking on several occasions and were clean during weeks or months, here the therapist needs one or two more sessions to implant the corresponding biological and chemical changes in the patients body.

An audio cassette is provided by the therapist for the patients to listen to at home, to fix certain behaviour patterns. The total anti-smoking-therapy needs between 3 and 6 sessions.

Helga Land-Kistenich has a diploma in psychology, pedagogic and is an approved psychotherapist, authorized by German Medical Colleges. 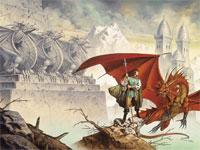 Bringing your dreams to life