MojûÀcar, on the AlmerûÙan East Coast, is a very beautiful village and many aspects of its architecture suggest a different era and even a different culture; its wealth of charming and attractive sceneries and beaches deserves to be seen and enjoyed.

History
The ancient centre of the pueblo was on a hill near the sea, MojûÀcar la Vieja. Historically it used to be the old town of Meschech o Mastia and it equally attracted the Phoenicians, the Carthaginians and the Romans.

In early VIII century it was part of the house of Tumir. Later it gave and maintained its allegiance to the Caliphate of Cû°rdoba; when the latter was dissolved, it was then conquered by the Sultan of Seville Al-Mutamid. During this period it also served as a frontier point between the Kingdom of Granada and Murcia.

It is said that on the 10th of June 1488, the Catholic Kings sent Captain Garcilasco de la Vega to speak with the Mayor of Mosaqar Alabez to make him see that they were both of the same land and that they should treat each other as brothers not enemies. This was readily accepted with the result that Moors and Christians learned to live with each other.

The town's symbol, the two-headed eagle, has now also become the symbol for the whole of AlmerûÙa.
Since the 60's it has also become a tourist attraction for its musicians, painters and artists in general. Yet, it has managed to maintain its Arabic flavour and characteristics. 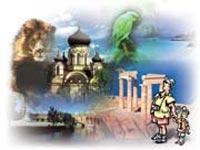 Do Travel Agents really face a bleak future?
"Most people require the services of travel agents at some stage - our Mori poll last October showed that only 6 per cent of people complete their holiday booking online" - ABTA spokeswoman.
FITUR 2004