The food reviews are not advertisements. We visit a different restaurant every month, we pay for the meal and we comment and give points as honestly as we can for the benefit of our readers.

The Staff
As we arrived, we were given a very warm welcome by the restaurant manager, Olivier de Paepe. Of course we recognised him because previously Oliver was the manager of the famous Valderrama Club de Golf Restaurant. The waiters and waitresses were all dressed in a type of ancient Roman attire, which seemed comfortable and complemented the environment. They were all very attentive, pleasant and, what is important, they seemed happy at their work and happy to see us.

Atmosphere
The restaurant derives its name and its theme from the time of Ancient Rome, 2000 years ago, when the river Guadiaro and its surrounding area were called Barbesula. The whole area surrounding the restaurant is a protected archaeological site. They were rather clever those Romans, they seemed to know all the best spots to enjoy themselves.
The restaurant forms part of the Cortijo Los Canos, a typical Spanish property built some 300 years ago featuring a large patio in the centre, which is also used for dining outside in the summer.
This is obviously a restaurant created for those who appreciate high quality food, served with the highest of standards, in a rather unique surrounding, however the atmosphere is not aloof or stuffy and one feels very comfortable and much at ease.

The Menu
Quite easy to read, in Spanish and English, it quite clearly adheres to the Ā“Mediterranean CuisineĀ” described in the literature. We were informed that the Chef, Glen Benito, was trained in top London restaurants.
The menu is changed four times a year, according to the seasons. This is done to ensure that only the very best and freshest local produces can be used each day.
The available selection comprises starters, fish, meat and desserts and there is definitely enough choice to accommodate any palate.

Wine List
The available choice of Spanish wines is impressive and it is designed to appeal to all palates, including the more sophisticated, topping the bill with Vega Sicilia Unico 91, a sought after Ribera del Duero. The selection is backed with some rather delightful French wines, which include the well known Chablis as well as a good choice of Bourgogne, Saint Emilion and St. Julian amongst others. The carte would not be complete without a substantial choice of French Champagne and some Cava, just to complete the range.

Langostine Tempura.
That is Japanese style fried langoustine in batter, served with a spiced risotto and gremalata sauce. FBA Ā– The langoustines were elegantly displayed around what seemed like a rice cake in the centre of the plate. The crispiness of the riceĀ’s outer layer matched perfectly the mild spices in the rice. I am certain I could taste the coriander. Had the rice been done in any other way it just would not have made this dish so distinctive and flavoursome.
Team score Ā– 10/10

Foie gras terrine.
Served with Sauterne jelly and toasted brioche. FBA Ā– We normally like fois gras at any time, however this was really special. The bright coloured Sauterne jelly seemed to have had a slight taste of orange peel added to it, making it the perfect partner for the fois gras and the brioche. A sheer luxury that teased the taste buds to prepare them for things to come.
Team score Ā– 10/10

Sea bass fillets.
Served with tuna sushi, maki rolls, a seared scallop, sauces to include wasabi, savoy cabbage and beurre tomate. Having started with the tempura and as I do like sushi, I thought it was wise to opt for this dish. I was also curious to see how this might suit a Mediterranean cuisine. FBA Ā– Immaculately displayed on the dish, the tuna sushi and maki rolls on one side, the bass fillets on the other. The tuna was not raw, as one might have expected, nor was the scallop, which made the dish as Mediterranean as it was meant to be. The maki rolls (rice rolled in seaweed sheet) were clearly added to complete the emphasis about the origin of the idea. The sea bass fillets were exceptional and I enjoyed switching morsels from one side of the plate to the other.
Team Score Ā– 9/10

Butter roasted beef fillet.
Served with a gratin of wild mushrooms and horseradish mash potato. As before, the presentation was impeccable and the fillet steak looked as it should: nice, thick and very tempting. FBA Ā– We asked for a medium steak and we got just that, done to perfection: red inside but not too red and runny. The horseradish mash was a new experience that I would certainly like to repeat, it quite simply enhanced the taste of the meat and the mushrooms, leaving us wanting more after every mouthful. I would certainly like to try this again.
Team Score Ā– 10/10

Hot chocolate fondant.
Topped with toffee sauce and served with vanilla ice-cream. FBA Ā– As the fork cut through the cake, the chocolate sauce oozed out on to the plate. After the first reaction to the surprise, one just cannot wait to spoon up the chocolate and try it with some of the ice-cream. The taste is indescribable, out of this world; you just have to try this yourself.
Team Score Ā– 10/10

Mango and Grand Marnier SoufflĆ©.
Served accompanied by a mango sorbet. FBA Ā– The soufflĆ© was light and done to perfection. My mouth is watering as I think of it while I write. It said mango soufflĆ© and that is exactly what it was, there was no mistake as to the flavour of it. The sorbet was the finishing touch intended to refresh and clean the palate, though I must confess, I deliberately dispatched the sorbet first so as to let the taste of the soufflĆ© linger on my palate for as long as possible.
Team Score Ā– 10/10

Summary
We knew that on this occasion it was not going to be easy to vote for each dish as we normally do, and it was not! How could it be when every single dish is so skilfully prepared with the sole intention of making an unforgettable impression on the diners? This is probably one of the few top restaurants on the Costa del Sol, with a consistently high standard in food quality, service and ambience. Definitely not the place for a quick meal, if you like your food and want to spend some quality time with your favourite people,
Restaurante Barbesula is highly recommended. From what we have seen by way of attendance on a Wednesday evening, there would seem to be a number of regular gourmets that would agree. 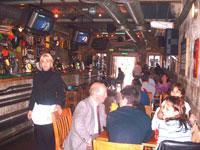